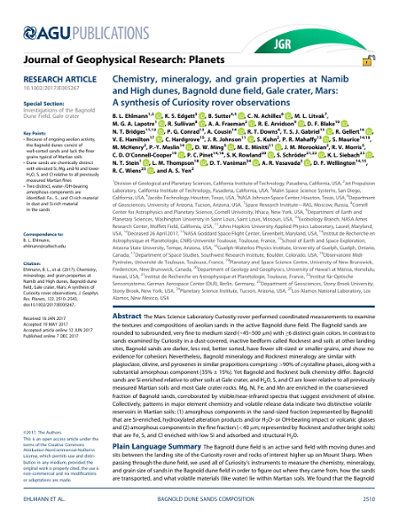 © 2017. The Authors. This is an open access article under the terms of the Creative Commons Attribution-NonCommercial-NoDerivs License.

The Mars Science Laboratory Curiosity rover performed coordinated measurements to examine the textures and compositions of aeolian sands in the active Bagnold dune field. The Bagnold sands are rounded to subrounded, very fine to medium sized (similar to 45-500m) with 6 distinct grain colors. In contrast to sands examined by Curiosity in a dust-covered, inactive bedform called Rocknest and soils at other landing sites, Bagnold sands are darker, less red, better sorted, have fewer silt-sized or smaller grains, and show no evidence for cohesion. Nevertheless, Bagnold mineralogy and Rocknest mineralogy are similar with plagioclase, olivine, and pyroxenes in similar proportions comprising >90% of crystalline phases, along with a substantial amorphous component (35%15%). Yet Bagnold and Rocknest bulk chemistry differ. Bagnold sands are Si enriched relative to other soils at Gale crater, and H2O, S, and Cl are lower relative to all previously measured Martian soils and most Gale crater rocks. Mg, Ni, Fe, and Mn are enriched in the coarse-sieved fraction of Bagnold sands, corroborated by visible/near-infrared spectra that suggest enrichment of olivine. Collectively, patterns in major element chemistry and volatile release data indicate two distinctive volatile reservoirs in Martian soils: (1) amorphous components in the sand-sized fraction (represented by Bagnold) that are Si-enriched, hydroxylated alteration products and/or H2O- or OH-bearing impact or volcanic glasses and (2) amorphous components in the fine fraction (<40m; represented by Rocknest and other bright soils) that are Fe, S, and Cl enriched with low Si and adsorbed and structural H2O. Plain Language Summary The Bagnold dune field is an active sand field with moving dunes and sits between the landing site of the Curiosity rover and rocks of interest higher up on Mount Sharp. When passing through the dune field, we used all of Curiosity's instruments to measure the chemistry, mineralogy, and grain size of sands in the Bagnold dune field in order to figure out where they came from, how the sands are transported, and what volatile materials (like water) lie within Martian soils. We found that the Bagnold sand dunes are very well sorted; no dusty materials are found within them, in stark contrast to soils seen previously with Curiosity and with rovers at other landing sites. We found that the coarser sand grains are enriched in the volcanic minerals olivine and pyroxene, confirming a prediction from orbit that wind-related activity seems to concentrate these phases. We also found that the dunes were much lower in water and other volatile elements like sulfur and chlorine versus all previous Mars soils. Using a combination of the rover's sieving system and chemical measurement tools, we figured out that two types of materials host water. In the first type of material, common in these sands, water is low in abundance (similar to 1%), very tightly bound to the grains, and is not released until temperatures >200 degrees C. In the second type of material, water is higher in abundance (2%) and more easily released by heating. Sieved water-bearing fine materials may be a useful resource for human explorers.

Except where otherwise noted, this item's license is described as © 2017. The Authors. This is an open access article under the terms of the Creative Commons Attribution-NonCommercial-NoDerivs License.