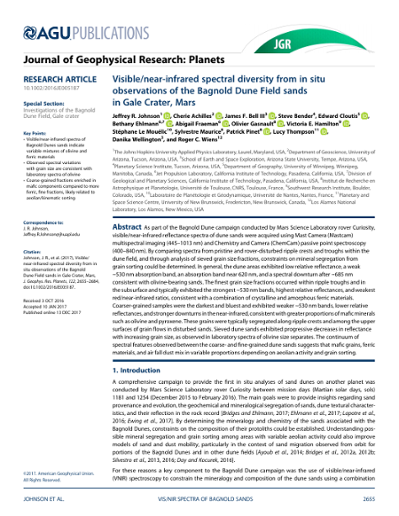 As part of the Bagnold Dune campaign conducted by Mars Science Laboratory rover Curiosity, visible/near-infrared reflectance spectra of dune sands were acquired using Mast Camera (Mastcam) multispectral imaging (445-1013nm) and Chemistry and Camera (ChemCam) passive point spectroscopy (400-840nm). By comparing spectra from pristine and rover-disturbed ripple crests and troughs within the dune field, and through analysis of sieved grain size fractions, constraints on mineral segregation from grain sorting could be determined. In general, the dune areas exhibited low relative reflectance, a weak similar to 530nm absorption band, an absorption band near 620nm, and a spectral downturn after similar to 685nm consistent with olivine-bearing sands. The finest grain size fractions occurred within ripple troughs and in the subsurface and typically exhibited the strongest similar to 530nm bands, highest relative reflectances, and weakest red/near-infrared ratios, consistent with a combination of crystalline and amorphous ferric materials. Coarser-grained samples were the darkest and bluest and exhibited weaker similar to 530nm bands, lower relative reflectances, and stronger downturns in the near-infrared, consistent with greater proportions of mafic minerals such as olivine and pyroxene. These grains were typically segregated along ripple crests and among the upper surfaces of grain flows in disturbed sands. Sieved dune sands exhibited progressive decreases in reflectance with increasing grain size, as observed in laboratory spectra of olivine size separates. The continuum of spectral features observed between the coarse- and fine-grained dune sands suggests that mafic grains, ferric materials, and air fall dust mix in variable proportions depending on aeolian activity and grain sorting.