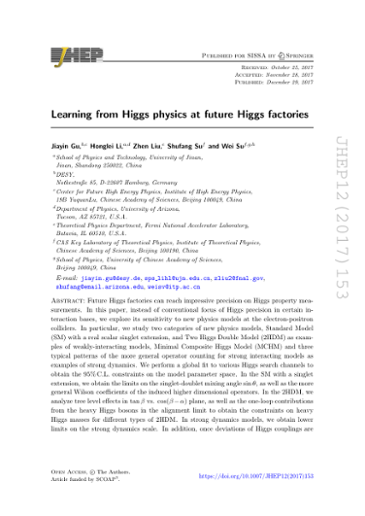 © The Authors. This article is distributed under the terms of the Creative Commons Attribution License (CC-BY 4.0).

Future Higgs factories can reach impressive precision on Higgs property measurements. In this paper, instead of conventional focus of Higgs precision in certain interaction bases, we explore its sensitivity to new physics models at the electron-positron colliders. In particular, we study two categories of new physics models, Standard Model (SM) with a real scalar singlet extension, and Two Higgs Double Model (2HDM) as examples of weakly-interacting models, Minimal Composite Higgs Model (MCHM) and three typical patterns of the more general operator counting for strong interacting models as examples of strong dynamics. We perform a global fit to various Higgs search channels to obtain the 95% C.L. constraints on the model parameter space. In the SM with a singlet extension, we obtain the limits on the singlet-doublet mixing angle sin theta, as well as the more general Wilson coefficients of the induced higher dimensional operators. In the 2HDM, we analyze tree level effects in tan beta vs. cos(beta-alpha) plane, as well as the one-loop contributions from the heavy Higgs bosons in the alignment limit to obtain the constraints on heavy Higgs masses for different types of 2HDM. In strong dynamics models, we obtain lower limits on the strong dynamics scale. In addition, once deviations of Higgs couplings are observed, they can be used to distinguish different models. We also compare the sensitivity of various future Higgs factories, namely Circular Electron Positron Collider (CEPC), Future Circular Collider (FCC)-ee and International Linear Collider (ILC).