Pragmatics Instruction in Korean as a Foreign Language Programs in the U.S.: Overview of the Programs, Instructors' Beliefs, and Pedagogical Application 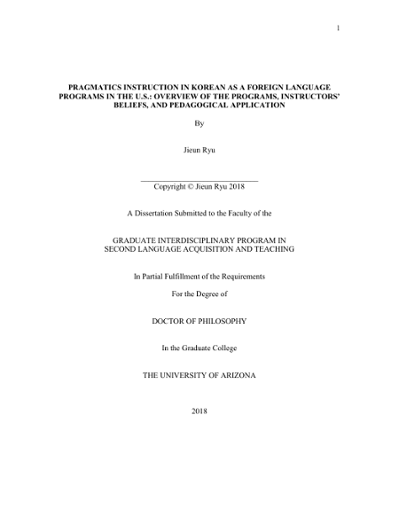 In the field of Korean as a foreign language (KFL) pragmatics, current scholarship documents a need for change in regards to speech styles as dynamic features (Byon, 2007; Chang, 2014; Cook, 2011; Jung, 2015; Park, 2012; Strauss & Eun, 2005; Yoon, 2010). However, speech styles are often taught at a pragmalinguistic level as a grammar point and in a textbook or in a classroom sociopragmatics presentation is limited to static contextual features such as one’s social status and/or age. Moreover, even though the honorifics system and speech styles are perceived as daunting by even the most advanced KFL learners (Brown, 2010, 2013; Byon, 2004, 2007; Choo, 1999; Shon, 1999; Yoon, 2010), the majority of KFL pragmatics research on speech styles focuses on students’ use and production of pragmatics features rather than focusing on the pedagogical application (see Byon, 2015; Song & Pyun, 2011). Instructors’ beliefs on teaching pragmatics and the background to their beliefs are also overlooked. This study is composed of three interrelated projects and grounded in pragmatics instructional studies, Pragmatic Consciousness Raising (PCR) (Rose 1994, 1999), multiliteracies pedagogy framework, and teachers’ beliefs research. The purpose of this mixed-method study is to understand KFL educators’ views on pragmatics instruction and the current state of pragmatics instruction in KFL programs at tertiary level institutions; the next step is to design and implement pragmatics lesson plans that are more practical and adaptable to current KFL programs. To this end, the research questions are 1) What is the current state of pragmatics instruction in KFL?; 2) What is KFL instructors’ cognition (Borg, 2006) of pragmatics instruction?; 3) Is speech styles instruction based on a multiliteracies pedagogy framework effective and what are the students’ perception toward the lessons? The research questions were answered through a survey and interviews of KFL educators as well as KFL students’ in-class and homework assignments and surveys before, during, and after the implementation of new lesson plans. The findings showed that the KFL field experienced positive changes such as collaboration with other instructors and curriculum development endeavors based on current theories and approaches in the field. However, similar issues and challenges to other less commonly taught language (LCTL) programs as well as their own unique challenges such as (over-)qualified teaching staff and an absence of equity and advocacy for instructors and programs still remained. The survey responses and interviews showed that both the administrators and instructors in KFL programs believe that pragmatics competence is crucial to developing proficiency in a foreign language and that pragmatics should be taught in class. The teachers’ own personal foreign language learning experiences were very influential in shaping their stated beliefs. However, it was also found that the teachers’ practices were based on their working definition of pragmatics rather than their espoused theories. In the classroom, textbooks provided the core element of curriculum and classroom practice, which the teachers thought contributed to persistently unsatisfactory approaches to pragmatics teaching. Drawing upon the survey and interview results, a series of instructional units, informed by PCR and multiliteracies pedagogy, was designed to be integrated into current textbook-oriented curricula and implemented in an upper elementary level Korean course. Contrary to the concerns of the interviewed KFL instructors, beginner-level students successfully participated and interacted meaningfully using authentic materials. The students showed development in metapragmatic awareness and in both pragmalinguistics and sociopragmatics knowledge. In addition, the students exhibited positive attitudes toward the instructional units. Based on this evidence, this dissertation concludes with implications and future research recommendations for teacher professional development training design, KFL curriculum, teaching material design, and teacher cognition research.