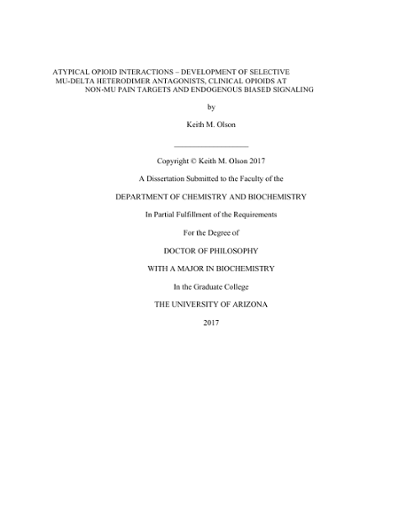 Most clinical opioids produce analgesia through the Mu Opioid Receptor (MOR) providing the only effective treatment for chronic pain patients. These studies explore three pre-clinical strategies to improve MOR analgesia and minimize side effects: 1) compounds that target G-protein Coupled Receptors (GPCRs) heterodimers, such as heterodimerization between the Delta Opioid Receptor (DOR) and MOR (MDOR); 2) multi-functional compounds that target multiple receptor systems for synergistic effects, such as a MOR agonist and a the serotonin reuptake transporter (SERT) inhibitor; or 3) biased agonists that preferentially activate one signaling pathway associated with analgesia over another associated with side effects at the same receptor. First, several indirect lines of evidence indicate the MOR-DOR heterodimer (MDOR) can regulate MOR opioid tolerance and withdrawal. However, studying MDOR remains difficult because no selective MDOR antagonists are available. To address this need, we created a novel series of bivalent MDOR antagonists by connecting a low affinity MOR antagonist (H-Tyr-Pro-Phe-D1Nal-NH2) to a moderate affinity DOR (H- Tyr-Tic-OH) antagonist with variable length polyamide spacers (15-41 atoms). In vitro radioligand binding and [35S]-GTPγS coupling assays in MOR, DOR, and MDOR expressing cell lines show bivalent ligands produce a clear length dependence in MDOR but not MOR or DOR cell lines. The lead compound – D24M with a 24-atom spacer – displayed high potency (IC50MDOR = 0.84 nM) with 91-fold selectivity for MDOR:DOR and 1,000-fold MDOR:MOR selectivity. Second, clinicians have long appreciated subtle but distinct differences in analgesia and side effects of MOR opioids. A variety of non-MOR targets including DOR, Kappa Opioid Receptor (KOR), the Cannabinoid Receptor-1 (CB1), the Sigma-1 Receptor (σ1R), the Dopamine- (DAT), Serotonin- (SERT) and Norepinephrine- Reuptake Transporters (NET) induce analgesia and/or modulate MOR mediated side effects. To determine if different opioid profiles arise from non-MOR interactions, we evaluated the binding and function of nine clinical analgesics at the nine aforementioned targets revealing several clinical opioids contain previously unidentified affinity’s or activity’s. Hydrocodone displayed low affinity at the MOR (KI = 1800 nM) and only ~2 fold less affinity at the σ1R (KI = 4000 nM). Second buprenorphine promoted monoamine influx at DAT, SERT and NET with EC50 > 1,000 nM. These novel interactions suggest the nuanced differences of clinical opioids may arise from previously unappreciated off-target effects. Future studies will assess whether these in vitro results predict hydrocodone and buprenorphine activity in vivo. Finally, the unique function of the numerous endogenous opioid peptides at a given receptor remains unclear. How endogenous ligands interact with ORs produces obvious drug design consequences. These studies show two endogenous Dynorphin analogues – Dynorphin A and Dynorphin B – differentially regulate two ubiquitous signaling modules – βarrestin2 and Gαi/o– at the DOR. Dynorphin A and Dynorphin B swap potency rank orders for β-arrestin2 recruitment and [35S]-GTPγS signaling, indicating two distinct signaling platforms are formed. Dynorphin A but not Dynorphin B treatment simulated AC super activation, while Dynoprhin B internalized DOR better than Dynorphin A. These in vitro assays suggest endogenous Dynorphin analogues differentially regulate signals at the DOR in vitro. Future work includes further characterizing signaling differences in vitro and testing these changes in vivo.