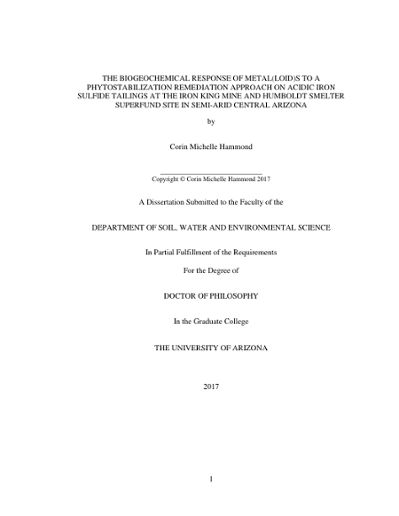 Particulate and dissolved forms of arsenic and heavy metals are released from legacy mine tailings, particularly in (semi-) arid environments where tailings remain barren of vegetation and therefore highly susceptible to erosion. This leads to contamination of adjacent ecosystems and increased risk to public health. Establishment of a vegetative cap using amendments, such as composted organic matter to enhance plant growth, may be employed to reduce both physical erosion and leaching, but the impacts of such practices on molecular-scale mechanisms controlling metal(loid) speciation and lability remain poorly understood. Here we report on subsurface biogeochemical transformations of metal(loid)s in a phytostabilization field study at a Superfund site in Arizona, USA, where a legacy pyritic tailings (4,000 mg kg^-1 As, 2,438 mg kg^-1 Pb, 6,142 mg kg^-1 Zn, 13.25% Fe, and 11.71% S, averages for the top 0.5 m) has undergone oxidation in the top 1 m. Tailings were amended in the top 20 cm with 10%, 15%, and 20% composted organic matter by mass and seeded with native halotolerant plant species. All field treatments and the uncomposted control received irrigation of 0.36 ± 0.03 mm y^-1 in addition to 0.25 ± 0.16 mm y^-1 of precipitation, resulting in water input of 144% the annual precipitation rate. The field trial incorporated four annual samplings from 2010 – 2013. Sampling consisted of a single core of 90 cm in length and 2.54 cm in diameter collected from each field plot that was subsequently sectioned into 20 cm depth increments for analysis by synchrotron Fe and As X-ray absorption spectroscopy (XAS) coupled with quantitative chemical extraction methods. Subsurface stabilization of arsenic by Prosopis juliflora (mesquite) was investigated by bulk and micro synchrotron XAS and multiple-energy microscale fluorescence mapping combined with chemical digestion of plant samples following 1, 2, and 3 months of growth in greenhouse microcosms as well as 14 and 36 months of growth at the field site. Results indicate persistence of oxidizing conditions following compost amendment in surface tailings despite addition of organic matter, development of heterotrophic microbial communities and irrigation of a poorly draining medium. Compost amendment of 20% corresponded with evidence of higher oxidative pyrite weathering activity at 40-60 cm depth during phytostabilization compared to treatments of 0% or 10% compost for which the highest oxidative pyrite weathering activity was observed closer to the surface at 20-40 cm depth.. Despite observed downward transport of As, Fe, Zn, Mn, Pb, Ni, Cu, Cr, V, and Co during phytostabilization, ≥ 75% of total As was found to be attenuated by ferrihydrite in surface depths. Attenuation of Mn, Co, and Ni was observed below 40 depth by tailings receiving compost amendment relative to the irrigated control. Root associated As(V) was immobilized on the root epidermis bound to ferric sulfate precipitates and within root vacuoles as trivalent As(III)-thiol complexes. Rhizoplane associated ferric sulfate phases were dissimilar from the bulk tailings mineralogy shown by XAS and exhibited a high capacity to scavenge As(V) with As:Fe ratios 2x higher than the compost amended growth medium, indicating a root surface mechanism for their formation or accumulation. Results indicate that arsenate attenuation in semi-arid mine tailings during phytostabilization greatly depends on the presence of high concentrations of Fe(III) (oxyhydr)oxide minerals with a high capacity for arsenic adsorption.