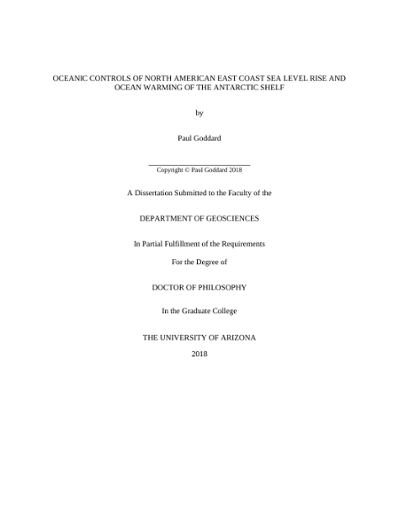 Sea level rise (SLR) threatens coastal communities, infrastructure, and ecosystems. Worldwide, stakeholders critically depend on SLR projections with the associated uncertainty for risk assessments, decision-making and coastal planning. Recent research suggests that the Antarctic ice sheet mass loss during the 21st century may contribute up to an additional one meter of global SLR by year 2100. While uncertainty still exists, this value would double the ‘likely’ (> 66% probability) range of global SLR (0.52-0.98 m) by the year 2100, as found by Chapter 13 on Sea Level Change in the Fifth Assessment Report by the Intergovernmental Panel on Climate Change. Here, we present three studies that assess mechanisms relevant to 21st century local, regional, and global SLR. Appendix A examines the effect of large-scale oceanic and atmospheric circulation variability on extreme sea levels along the East Coast of North America. Appendices B and C analyze ocean warming on the Antarctic shelf and its implications for future ice shelf basal melt and Antarctic Ice Sheet mass loss. These studies will contribute to more accurate projections of local, regional, and global SLR. In Appendix A, we analyze long-term tide gauge records from the North American eastern seaboard and find an extreme SLR event during 2009-2010. Within this two-year period, coastal sea levels spiked between Montauk, New York and Southern Canada by up to 128 mm. This two-year spike is unprecedented in the tide gauge record and found to be a 1-in-850 year event. We show that a 30% reduction in strength of the Atlantic meridional overturning circulation (AMOC) and a strong negative North Atlantic Oscillation (NAO) index caused the extreme SLR event. Climate models project that the AMOC will weaken and NAO variability will remain high over the 21st century. Consequently, extreme SLR events on the Northeast Coast could become more frequent during the 21st century in response to climate change and SLR. In Appendix B, we use a fine-resolution global climate model (GFDL CM2.6) that resolves an eddying ocean. With this state-of-the-art coupled model, we quantify the mechanisms contributing to ocean warming on the Antarctic continental shelf in an idealized experiment of doubling of the atmospheric CO2 concentration. The results show that the CO2 forcing leads to the shelf region warming both in the upper 100 m ocean and at depths near the sea floor. These warming patterns are controlled by different mechanisms. In the upper 100 m, the heat anomalies are primarily controlled by increased heat transport into the shelf region associated with the warmer near-surface waters from lower latitudes. Below 100 m, the heat anomalies develop due to increased onshore intrusions of relatively warm Circumpolar Deep Water and reduced vertical mixing of heat in the water column. A complete heat budget analysis is performed for the Antarctic shelf region as well as for six subdomains and three depth ranges (0-100 m, 100-700 m, and 700-1000 m). The results show that certain regions of the Antarctic shelf are more susceptible to large CO2-forced warming. These findings have implications for future Antarctic Ice Sheet mass loss and SLR, and can provide more detailed and accurate ocean boundary conditions for dynamical ice sheet models. In Appendix C, we use CM2.6 to examine the connections among ocean freshening and the magnitude and location of ocean warming on the Antarctic shelf. We find that CO2 forcing freshens the Antarctic shelf seas via increases in local precipitation, sea ice loss, liquid runoff, and iceberg calving. The freshening induces three heat budget-relevant responses: (1) reduced vertical mixing; (2) strengthening of the Antarctic Slope Front (ASF); and (3) increased eddy kinetic energy (EKE) near the ASF. First, heat can accumulate at depth (100-1000 m) as freshening increases the vertical stratification on the shelf and reduces upward mixing of heat associated with diffusion and convective processes. Second, freshening near the shelf break strengthens the ASF by increasing the lateral density gradient and by steepening and deepening the associated isopycnals. This response limits cross-ASF onshore heat transport at many locations around Antarctica. Third, EKE increases near the ASF may contribute to shelf warming by increasing cross-ASF onshore eddy heat transport. These results demonstrate the importance of shelf freshening to the development of positive heat anomalies on the Antarctic shelf. The findings provide new insight to the location of future shelf warming and ice shelf basal melting as well as provide significant information for projecting regional and global SLR.