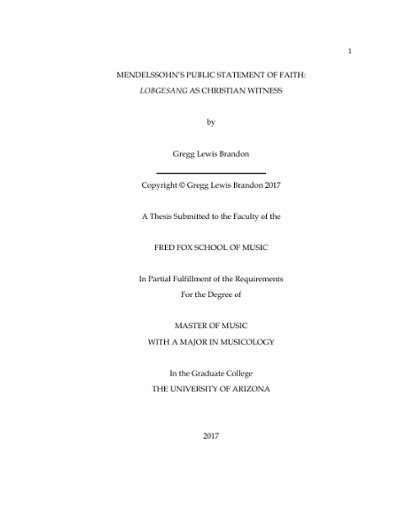 In a letter from July 21, 1840, Felix Mendelssohn Bartholdy (1809–1847) shared with his friend Karl Klingemann that in his Symphony No. 2 in B-flat Major, the Lobgesang, “all the movements, vocal and instrumental, are composed to the words ‘Everything that breathes, praise the Lord’; you understand that the instruments first praise in their own way, and then the chorus and the individual voices.” This tantalizing passage is not a direct profession of faith, but the language of praising God through music does raise questions about Mendelssohn’s personal religious philosophy. The topic of Mendelssohn’s faith has been the subject of much speculation; some have assumed as the grandson of eighteenth-century Jewish philosopher Moses Mendelssohn, he ought to be considered Jewish, while others, such as R. Larry Todd, have posited that “despite a willingness to compose sacred music for different faiths, in his personal convictions Mendelssohn adhered to the Protestant creed.” Mendelssohn’s Lobgesang contains evidence of his deeply-held Protestant identity. Its “motto” theme appears at the beginning, middle, and end of Lobgesang. The first time with instruments alone; the second time sung with the text, “Alles, was odem hat, lobe den Herrn” (“Everything that breathes, praise the Lord,” Psalm 150:6), and lastly, at the end of the work, by the instruments alone, suggesting the associated text even though it is not uttered aloud. Combining this cyclical quality with the appearance of self-quotations and the Christo-centric thrust of the rest of Lobgesang’s text, we are invited to view Lobgesang as a lens through which to view other works as having been composed for the glory of God—specifically, the God Mendelssohn knew from a Protestant perspective. This paper contributes to the ongoing discussion about the relationship between music and identity, with a focus also placed on the continuing conversation about musical quotation and reference.