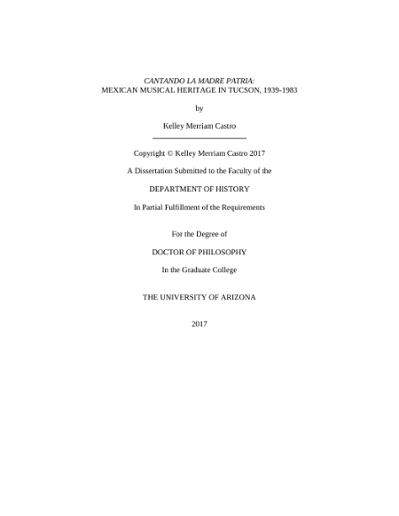 The maintenance, performance, and practice of Mexican music formed part of a resistance effort against cultural, political, economic, gendered, and geographic marginalization throughout the course of the twentieth century in Tucson, Arizona. This project defines iconic, popular Mexican music as música cósmica, a term inspired by José Velasco’s raza cósmica, and which refers to the music’s role as a unifying cultural expression for individuals of Mexican descent in Tucson and other diaspora communities. This project draws from new and archived interviews, newspapers, recorded performances, radio programs, and other ephemera of Tucson’s musical past to outline how la música cósmica formed part of an organic cultural expression of the people of the U.S. southwest, one that informed and was informed by the corpus being developed and promoted out of Mexico City. The process of maintaining la música cósmica in Tucson as a source of collective identity and resistance involved a deep commitment to maintaining musical places, spaces, and talents in the face of political, social, and geographic marginalization, including the physical destruction of Mexican homes and businesses in the name of urban renewal. Community leaders and music teachers viewed the teaching of música cósmica to Tucson youth as part of a social justice educational revolution, yet to teach the music they first had to overcome the internalization of anti-Mexican sentiment that viewed Mexican cultural expressions as inferior and overtly feminine. They reclaimed pride in this marginalized identity, the feminized fatherland or madre patria, through reframing the interpretation of the music as a cultural expression requiring precision, excellence, and that held monetary value. Music teachers employed a commitment to excellence and an insistence on paid performances to transform the perception of the music from that of an expression of inferior culture to one worthy of pride, respect, and admiration. Tucsonans approached the teaching and performing of la música cósmica with a profound sense of duty, one that inspired heroic acts of dedication and united Tucsonans of Mexican descent in spite of otherwise deep and painful divisions over political ideologies, popular tastes, skin color, personal experience, and the process of social change. The deep scar left by urban renewal, neighborhood demolition, and family relocation left many bitter divisions among members of Tucson’s community of Mexican descent. Nonetheless, la música cósmica continued to play a unifying role, and Tucsonans came together across these differences to ensure its survival, and to ensure their own cultural survival in the city´s public narrative as a result. By the 1980s, Tucson boasted numerous youth mariachi programs and hosted the first annual International Mariachi Conference, converting a city that continued to struggle with its collective identity into a global center for the teaching and performing of Mexican music.