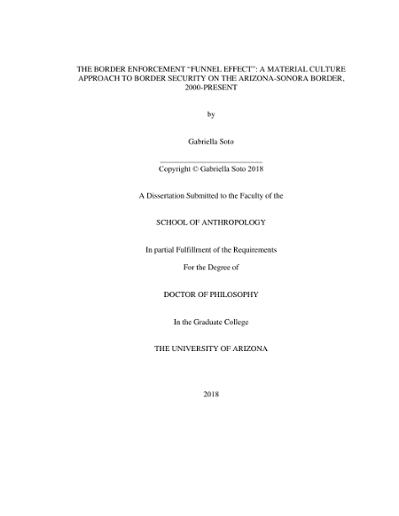 Nearly two decades have passed since the strategic border security paradigm known as “prevention through deterrence” (PTD) took root in the landscape of Southern Arizona. The aim of PTD was to deter illicit migration by strategically amassing border security forces to funnel migrants into increasingly remote and treacherous territory where they would face increased risk. Indeed, risk was to be the prime factor of deterrence. Thousands of undocumented migrants died attempting to overcome those risks in an outcome known as the “funnel effect,” wherein migration patterns shifted to overcome bypass and overcome border security. When speaking about PTD taking root in southern Arizona, I mean that this geography is the locus of the funnel effect and has been since 2001. Southern Arizona represents the longest stretch of border walling in the United States and the highest concentrations of border security personnel and undocumented migration activity since the early 2000s. In this sense, this region is a useful point of focus for evaluating the outcomes and efficacy of the border security apparatus. Here, the PTD strategy has been physically tethered to the landscape as border security infrastructure has literally been dug into the ground. With the hundreds of border security infrastructure and wall projects have also come the hundreds of clandestine trails routed around them used by undocumented migrants, and hundreds of tons of left behind migrant survival materials like backpacks, water bottles, blankets, and rosaries. Over the years while border security has expanded, the evidence associated with migration has shifted in turn reflecting a dialectical engagement between the formal border security apparatus and the informal politics of migrants. While many scholars have studied either border security or the risks faced by migrants, few have looked at their mutual influence over time. This dissertation incorporated a multidisciplinary methodological approach, including ethnography, archival research, archaeology, and GIS technology. These methods allowed me to answer the following questions: What are the social and material effects of border enforcement policy on the ground? How have these changed over the 15 years of concentrated border enforcement in this area, both geographically and in terms of their volume and constitution? What are the stories, the experiences, and the tangible points on the landscape that mark these processes? I viewed the material signature of migration as a form of ruins both literally and metaphorically as they mark the scars of abandonment, loss, and failure. Following Walter Benjamin, I conceived of such ruins as an indictment of the political conditions that led to their formation. In the spirit of Benjamin, I also prioritized this form of marginalized material evidence. Questions of memory and materiality were also entwined with realities of absence and a search for fragmentary traces. I encountered this reality constantly in fieldwork, as when a place known to have been a major clandestine travel corridor for migration was often found completely cleared of all evidence of use. I also routinely walked past coordinates where migrant bodies were recovered, and where no evidence of that tragedy was left. A dialectical approach also highlighted how much more accessible and visible the actions related to the implementation of the United States border security were in relation to those of migrants. Further, the material evidence associated with migration was actively being removed, often as an environmental hazard. Thus, this project also came to encompass questions about the process of historical creation and heritage. Among those who live and work in the borderlands, this contemporary situation was already largely conceptualized in terms of its heritage potential. Will we remember this episode in history as we remember the Berlin Wall, or Japanese internment camps in the United States, as many of the border residents who participated in my project speculated? Certain public land managers along the border anticipated that their heritage future may well be as lands associated with the migration experience, circa the turn of the 21st century. It is acknowledged that this is a dark chapter of history. But, how does one curate history in the making? All of this inextricably links to issues of power. This is the power to decide what is culturally valuable or relevant, as well as the power to define historical narratives as they are made. Border security itself is about maintaining U.S. sovereignty, while defining the value of migrant lives and deaths as the border is secured. This is also a set of values that prioritizes border security over reform to the system that could facilitate labor migration. There is also a hierarchy to what survives between the monumental architecture of border security and the ephemeral tools and structures of clandestine migration. The latter are hidden and actively decaying while the former will stand the test of time. This dissertation analyzes the informal and the fragmentary side by side with the formal and monumental. What do decaying survival materials dropped by undocumented migrants, decaying migrant bodies in the wilderness, and hundreds of miles of clandestine smuggler trails in one of the most highly secured borderlands in one of the most powerful countries in the world say about power here? On a practical level, the accumulated evidence are read as an indictment of border security, revealing that the building of walls and surveillance structures have not stopped migration, though they have led to increasingly imperiled migrant journeys.