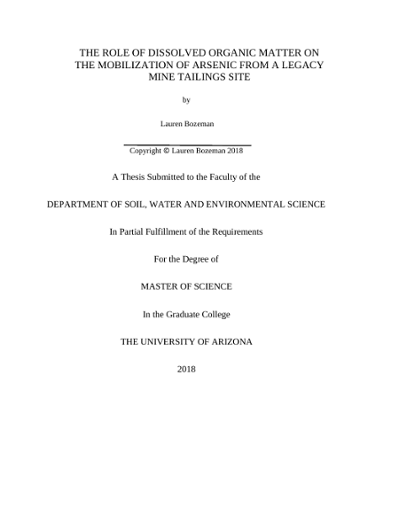 Legacy mine sites are of concern due to their prevalence and associated environmental and human health risks. The United States Bureau of Land Management estimates as many as 500,000 abandoned mine sites in the US (BLM, 2017). Sites requiring costly management and long-term response to the environmental hazardous risks can be designated to a National Priority List (NPL) by the Environmental Protection Agency (EPA) under the Comprehensive Environmental Response, Compensation and Liability Act (CERCLA) (EPA, 2017). One such site, located in Central Arizona, is the Iron King Mine Humboldt Smelter Superfund Site (IKMHSSS). The site was designated to the NPL in 2008 due to concerns regarding the size of the tailing pile, the proximity of contaminated materials to the town of Dewey-Humboldt and waterways, and the dangerous concentrations of arsenic (As) and lead (Pb) of the tailings (EPA, 2017). Remediation efforts have been ongoing since the designation of the site to the NPL, including sampling, yard soil removal, and distribution of information to the local community regarding risks from the site. The University of Arizona Superfund Research Program (UA SRP) has conducted greenhouse and phytostabilization studies of the site in an attempt to understand the processes and mechanisms employed to stabilize the tailings materials as well as reduce dust emissions from the tailings to the town of Dewey-Humboldt (Gil-Loaiza et al., 2016). This effort has successfully demonstrated a reduction of dust emissions (Sáez, 2016), however chemical changes to the tailings due to phytostabilization are the focus of this research. This work attempts to ascertain whether adverse effects from the method of phytostabilization are observed in the pore waters of the tailing material, in particular the potential for contamination of water sources by mobilized As through chemical or microbiological means. Recent studies have proposed potential mechanisms that can promote mobilization of As by dissolved organic matter (DOM) (Mladenov et al., 2015). Heterotrophic microbial respiration under O2 limited conditions can cause the reduction of Fe3+ to Fe2+, enhancing desorption or dissolution of As from Fe containing minerals (Hasan et al., 2007). Additionally, DOM competes with As for sorption sites at mineral surfaces (Grafe et al., 2002). In this study, batch and column experiments were used to investigate the mechanisms of sequestration and release of As in compost amended mine tailings. Mine tailings were reacted in triplicate in the presence and absence of DOM using plain tailings and radiated tailings for microbiological control and under anoxic and oxic conditions at timescales from ranging from 3 to 900 hours for batch experiments and 1 to 900 pore volumes in column experiments. The highest As release to pore waters was observed under anoxic conditions in the presence of DOM both with microbial activity inhibited and uninhibited through 60Co gamma irradiation after 3 and 910 h of reaction. The release of As from batch experiments was lowest in the control treatment with no DOM added to tailings in both anoxic and oxic treatments after 24 h. Column flow-through experiments were also carried out to better understand the kinetic biogeochemistry of the tailings interacting with DOM. Columns were completed under suboxic conditions to best mimic field scenarios. To test the effect of microbes, control tailing samples were sterilized by 60Co gamma irradiation prior to flowing DOM. Pore volumes (PV) were collected using fractionation equipment from 1 to 900 PVs. The release of As was highest in the presence of DOM after approximately 40 PVs when As release began increasing to its maximum release of 50 μmol l-1. No significant difference between irradiated and non-irradiated tailings was observed in either irradiated or non-irradiated tailings. Lowest release of As to effluent solutions was in the absence of DOM. These results were consistent with the findings from batch experiments. Batch and column experiments show that DOM influences the mobilization of As from mine tailings, and demonstrates the potential risk to proximal ground water resources in the absence of attenuation processes between the oxidized tailings and groundwater.