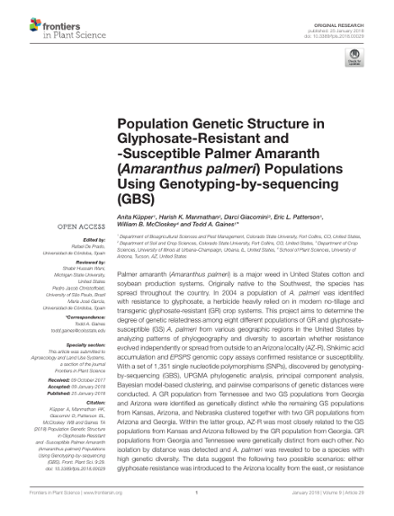 © 2018 Küpper, Manmathan, Giacomini, Patterson, McCloskey and Gaines. This is an open-access article distributed under the terms of the Creative Commons Attribution License (CC BY).

Palmer amaranth (Amaranthus palmeri) is a major weed in United States cotton and soybean production systems. Originally native to the Southwest, the species has spread throughout the country. In 2004 a population of A. palmeri was identified with resistance to glyphosate, a herbicide heavily relied on in modern no-tillage and transgenic glyphosate-resistant (GR) crop systems. This project aims to determine the degree of genetic relatedness among eight different populations of GR and glyphosate-susceptible (GS) A. palmeri from various geographic regions in the United States by analyzing patterns of phylogeography and diversity to ascertain whether resistance evolved independently or spread from outside to an Arizona locality (AZ-R). Shikimic acid accumulation and EPSPS genomic copy assays confirmed resistance or susceptibility. With a set of 1,351 single nucleotide polymorphisms (SNPs), discovered by genotyping-by-sequencing (GBS), UPGMA phylogenetic analysis, principal component analysis, Bayesian model-based clustering, and pairwise comparisons of genetic distances were conducted. A GR population from Tennessee and two GS populations from Georgia and Arizona were identified as genetically distinct while the remaining GS populations from Kansas, Arizona, and Nebraska clustered together with two GR populations from Arizona and Georgia. Within the latter group, AZ-R was most closely related to the GS populations from Kansas and Arizona followed by the GR population from Georgia. GR populations from Georgia and Tennessee were genetically distinct from each other. No isolation by distance was detected and A. palmeri was revealed to be a species with high genetic diversity. The data suggest the following two possible scenarios: either glyphosate resistance was introduced to the Arizona locality from the east, or resistance evolved independently in Arizona. Glyphosate resistance in the Georgia and Tennessee localities most likely evolved separately. Thus, modern farmers need to continue to diversify weed management practices and prevent seed dispersal to mitigate herbicide resistance evolution in A. palmeri.