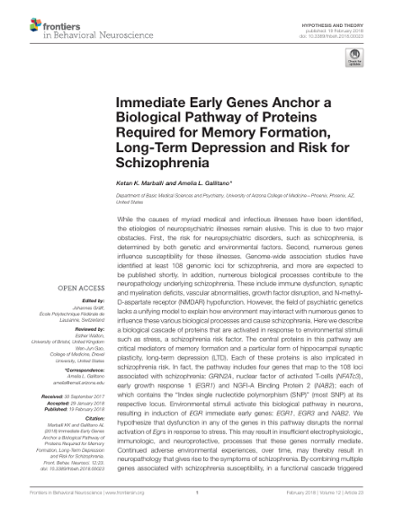 © 2018 Marballi and Gallitano. This is an open-access article distributed under the terms of the Creative Commons Attribution License (CC BY).

While the causes of myriad medical and infectious illnesses have been identified, the etiologies of neuropsychiatric illnesses remain elusive. This is due to two major obstacles. First, the risk for neuropsychiatric disorders, such as schizophrenia, is determined by both genetic and environmental factors. Second, numerous genes influence susceptibility for these illnesses. Genome-wide association studies have identified at least 108 genomic loci for schizophrenia, and more are expected to be published shortly. In addition, numerous biological processes contribute to the neuropathology underlying schizophrenia. These include immune dysfunction, synaptic and myelination deficits, vascular abnormalities, growth factor disruption, and N-methyl-D-aspartate receptor (NMDAR) hypofunction. However, the field of psychiatric genetics lacks a unifying model to explain how environment may interact with numerous genes to influence these various biological processes and cause schizophrenia. Here we describe a biological cascade of proteins that are activated in response to environmental stimuli such as stress, a schizophrenia risk factor. The central proteins in this pathway are critical mediators of memory formation and a particular form of hippocampal synaptic plasticity, long-term depression (LTD). Each of these proteins is also implicated in schizophrenia risk. In fact, the pathway includes four genes that map to the 108 loci associated with schizophrenia: GRIN2A, nuclear factor of activated T-cells (NFATc3), early growth response 1 (EGR1) and NGFI-A Binding Protein 2 (NAB2); each of which contains the "Index single nucleotide polymorphism (SNP)" (most SNP) at its respective locus. Environmental stimuli activate this biological pathway in neurons, resulting in induction of EGR immediate early genes: EGR1, EGR3 and NAB2. We hypothesize that dysfunction in any of the genes in this pathway disrupts the normal activation of Egrs in response to stress. This may result in insufficient electrophysiologic, immunologic, and neuroprotective, processes that these genes normally mediate. Continued adverse environmental experiences, over time, may thereby result in neuropathology that gives rise to the symptoms of schizophrenia. By combining multiple genes associated with schizophrenia susceptibility, in a functional cascade triggered by neuronal activity, the proposed biological pathway provides an explanation for both the polygenic and environmental influences that determine the complex etiology of this mental illness.