Comparison of Treatment for Metabolic Disorders Associated with Autism:Reanalysis of Three Clinical Trials 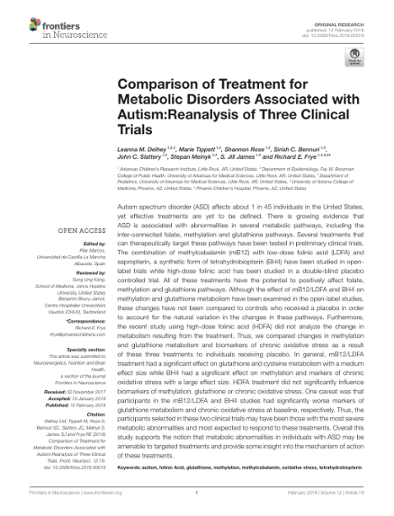 Comparison of Treatment for Metabolic Disorders Associated with Autism:Reanalysis of Three Clinical Trials 2018, 12 Frontiers in Neuroscience

© 2018 Delhey, Tippett, Rose, Bennuri, Slattery, Melnyk, James and Frye. This is an open-access article distributed under the terms of the Creative Commons Attribution License (CC BY).

Autism spectrum disorder (ASD) affects about 1 in 45 individuals in the United States, yet effective treatments are yet to be defined. There is growing evidence that ASD is associated with abnormalities in several metabolic pathways, including the inter-connected folate, methylation and glutathione pathways. Several treatments that can therapeutically target these pathways have been tested in preliminary clinical trials. The combination of methylcobalamin (mB12) with low-dose folinic acid (LDFA) and sapropterin, a synthetic form of tetrahydrobiopterin (BH4) have been studied in open label trials while high-dose folinic acid has been studied in a double-blind placebo controlled trial. All of these treatments have the potential to positively affect folate, methylation and glutathione pathways. Although the effect of mB12/LDFA and BH4 on methylation and glutathione metabolism have been examined in the open-label studies, these changes have not been compared to controls who received a placebo in order to account for the natural variation in the changes in these pathways. Furthermore, the recent study using high-dose folinic acid (HDFA) did not analyze the change in metabolism resulting from the treatment. Thus, we compared changes in methylation and glutathione metabolism and biomarkers of chronic oxidative stress as a result of these three treatments to individuals receiving placebo. In general, mB12/LDFA treatment had a significant effect on glutathione and cysteine metabolism with a medium effect size while BH4 had a significant effect on methylation and markers of chronic oxidative stress with a large effect size. HDFA treatment did not significantly influence biomarkers of methylation, glutathione or chronic oxidative stress. One caveat was that participants in the mB12/LDFA and BH4 studies had significantly worse markers of glutathione metabolism and chronic oxidative stress at baseline, respectively. Thus, the participants selected in these two clinical trials may have been those with the most severe metabolic abnormalities and most expected to respond to these treatments. Overall this study supports the notion that metabolic abnormalities in individuals with ASD may be amenable to targeted treatments and provide some insight into the mechanism of action of these treatments.

Except where otherwise noted, this item's license is described as © 2018 Delhey, Tippett, Rose, Bennuri, Slattery, Melnyk, James and Frye. This is an open-access article distributed under the terms of the Creative Commons Attribution License (CC BY).