Investigation of Charon's Craters With Abrupt Terminus Ejecta, Comparisons With Other Icy Bodies, and Formation Implications 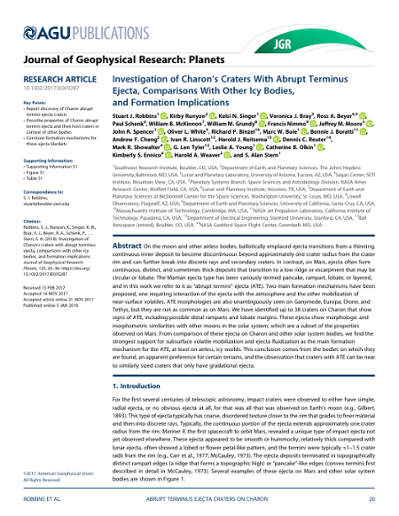 On the moon and other airless bodies, ballistically emplaced ejecta transitions from a thinning, continuous inner deposit to become discontinuous beyond approximately one crater radius from the crater rim and can further break into discrete rays and secondary craters. In contrast, on Mars, ejecta often form continuous, distinct, and sometimes thick deposits that transition to a low ridge or escarpment that may be circular or lobate. The Martian ejecta type has been variously termed pancake, rampart, lobate, or layered, and in this work we refer to it as abrupt termini ejecta (ATE). Two main formation mechanisms have been proposed, one requiring interaction of the ejecta with the atmosphere and the other mobilization of near-surface volatiles. ATE morphologies are also unambiguously seen on Ganymede, Europa, Dione, and Tethys, but they are not as common as on Mars. We have identified up to 38 craters on Charon that show signs of ATE, including possible distal ramparts and lobate margins. These ejecta show morphologic and morphometric similarities with other moons in the solar system, which are a subset of the properties observed on Mars. From comparison of these ejecta on Charon and other solar system bodies, we find the strongest support for subsurface volatile mobilization and ejecta fluidization as the main formation mechanism for the ATE, at least on airless, icy worlds. This conclusion comes from the bodies on which they are found, an apparent preference for certain terrains, and the observation that craters with ATE can be near to similarly sized craters that only have gradational ejecta.