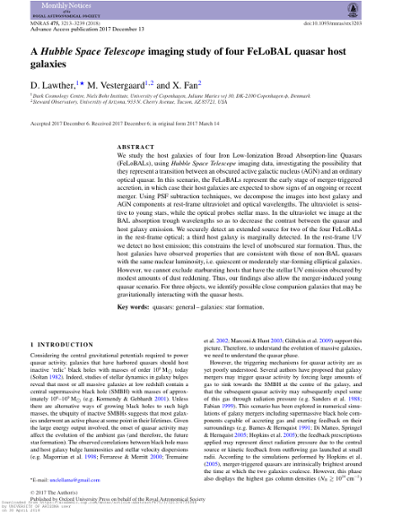 We study the host galaxies of four Iron Low-Ionization Broad Absorption-line Quasars (FeLoBALs), using Hubble Space Telescope imaging data, investigating the possibility that they represent a transition between an obscured active galactic nucleus (AGN) and an ordinary optical quasar. In this scenario, the FeLoBALs represent the early stage of merger-triggered accretion, in which case their host galaxies are expected to show signs of an ongoing or recent merger. Using PSF subtraction techniques, we decompose the images into host galaxy and AGN components at rest-frame ultraviolet and optical wavelengths. The ultraviolet is sensitive to young stars, while the optical probes stellar mass. In the ultraviolet we image at the BAL absorption trough wavelengths so as to decrease the contrast between the quasar and host galaxy emission. We securely detect an extended source for two of the four FeLoBALs in the rest-frame optical; a third host galaxy is marginally detected. In the rest-frame UV we detect no host emission; this constrains the level of unobscured star formation. Thus, the host galaxies have observed properties that are consistent with those of non-BAL quasars with the same nuclear luminosity, i.e. quiescent or moderately star-forming elliptical galaxies. However, we cannot exclude starbursting hosts that have the stellar UV emission obscured by modest amounts of dust reddening. Thus, our findings also allow the merger-induced young quasar scenario. For three objects, we identify possible close companion galaxies that may be gravitationally interacting with the quasar hosts.