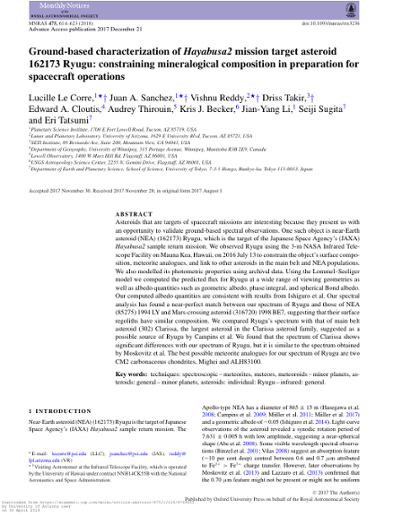 Asteroids that are targets of spacecraft missions are interesting because they present us with an opportunity to validate ground-based spectral observations. One such object is near-Earth asteroid (NEA) (162173) Ryugu, which is the target of the Japanese Space Agency's (JAXA) Hayabusa2 sample return mission. We observed Ryugu using the 3-m NASA Infrared Telescope Facility on Mauna Kea, Hawaii, on 2016 July 13 to constrain the object's surface composition, meteorite analogues, and link to other asteroids in the main belt and NEA populations. We also modelled its photometric properties using archival data. Using the Lommel-Seeliger model we computed the predicted flux for Ryugu at a wide range of viewing geometries as well as albedo quantities such as geometric albedo, phase integral, and spherical Bond albedo. Our computed albedo quantities are consistent with results from Ishiguro et al. Our spectral analysis has found a near-perfect match between our spectrum of Ryugu and those of NEA (85275) 1994 LY and Mars-crossing asteroid (316720) 1998 BE7, suggesting that their surface regoliths have similar composition. We compared Ryugu's spectrum with that of main belt asteroid (302) Clarissa, the largest asteroid in the Clarissa asteroid family, suggested as a possible source of Ryugu by Campins et al. We found that the spectrum of Clarissa shows significant differences with our spectrum of Ryugu, but it is similar to the spectrum obtained by Moskovitz et al. The best possible meteorite analogues for our spectrum of Ryugu are two CM2 carbonaceous chondrites, Mighei and ALH83100.