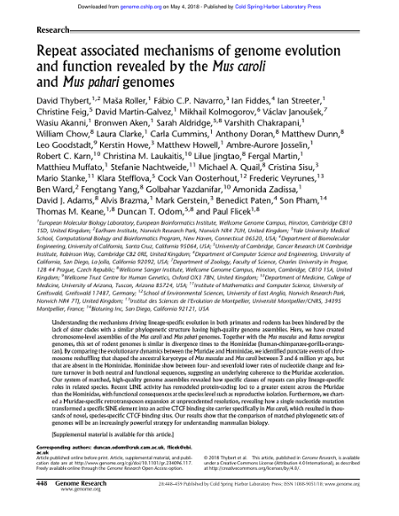 Understanding the mechanisms driving lineage-specific evolution in both primates and rodents has been hindered by the lack of sister clades with a similar phylogenetic structure having high-quality genome assemblies. Here, we have created chromosome-level assemblies of the Mus caroli and Mus pahari genomes. Together with the Mus musculus and Rattus norvegicus genomes, this set of rodent genomes is similar in divergence times to the Hominidae (human-chimpanzee-gorilla-orangutan). By comparing the evolutionary dynamics between the Muridae and Hominidae, we identified punctate events of chromosome reshuffling that shaped the ancestral karyotype of Mus musculus and Mus caroli between 3 and 6 million yr ago, but that are absent in the Hominidae. Hominidae show between four- and sevenfold lower rates of nucleotide change and feature turnover in both neutral and functional sequences, suggesting an underlying coherence to the Muridae acceleration. Our system of matched, high-quality genome assemblies revealed how specific classes of repeats can play lineage-specific roles in related species. Recent LINE activity has remodeled protein-coding loci to a greater extent across the Muridae than the Hominidae, with functional consequences at the species level such as reproductive isolation. Furthermore, we charted a Muridae-specific retrotransposon expansion at unprecedented resolution, revealing how a single nucleotide mutation transformed a specific SINE element into an active CTCF binding site carrier specifically in Mus caroli, which resulted in thousands of novel, species-specific CTCF binding sites. Our results show that the comparison of matched phylogenetic sets of genomes will be an increasingly powerful strategy for understanding mammalian biology.