A Decade of MWC 758 Disk Images: Where Are the Spiral-arm-driving Planets? 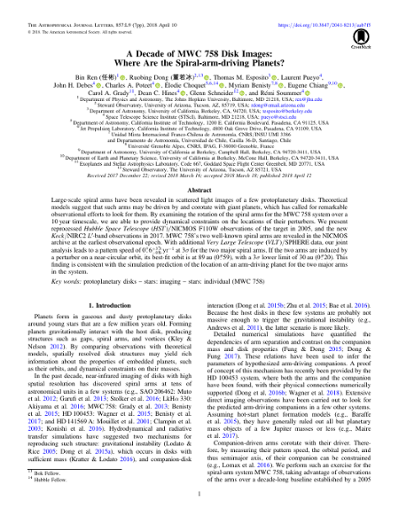 Large-scale spiral arms have been revealed in scattered light images of a few protoplanetary disks. Theoretical models suggest that such arms may be driven by and corotate with giant planets, which has called for remarkable observational efforts to look for them. By examining the rotation of the spiral arms for the MWC 758 system over a 10 year timescale, we are able to provide dynamical constraints on the locations of their perturbers. We present reprocessed Hubble Space Telescope (HST )/NICMOS F110W observations of the target in 2005, and the new Keck/NIRC2 L′-band observations in 2017. MWC 758ʼs two well-known spiral arms are revealed in the NICMOS archive at the earliest observational epoch. With additional Very Large Telescope (VLT )/SPHERE data, our joint analysis leads to a pattern speed of 0.6 degrees(+3.3 degrees)(-0.6 degrees) yr(-1) at 3σ for the two major spiral arms. If the two arms are induced by a perturber on a near-circular orbit, its best-fit orbit is at 89 au (0 59), with a 3σ lower limit of 30 au (0 20). This finding is consistent with the simulation prediction of the location of an arm-driving planet for the two major arms in the system.