ASASSN-15no: the Supernova that plays hide-and-seek 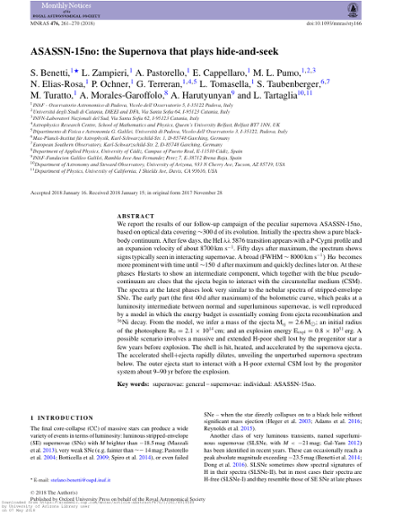 We report the results of our follow-up campaign of the peculiar supernova ASASSN-15no, based on optical data covering similar to 300 d of its evolution. Initially the spectra show a pure black-body continuum. After few days, the HeI lambda lambda 5876 transition appears with a P-Cygni profile and an expansion velocity of about 8700 km s(-1). Fifty days after maximum, the spectrum shows signs typically seen in interacting supernovae. A broad (FWHM similar to 8000 km s(-1)) H alpha becomes more prominent with time until similar to 150 d after maximum and quickly declines later on. At these phases Hastarts to show an intermediate component, which together with the blue pseudo-continuum are clues that the ejecta begin to interact with the circumstellar medium (CSM). The spectra at the latest phases look very similar to the nebular spectra of stripped-envelope SNe. The early part (the first 40 d after maximum) of the bolometric curve, which peaks at a luminosity intermediate between normal and superluminous supernovae, is well reproduced by a model in which the energy budget is essentially coming from ejecta recombination and Ni-56 decay. From the model, we infer a mass of the ejecta M-ej = 2.6M(circle dot); an initial radius of the photosphere R-0 = 2.1 x 10(14) cm; and an explosion energy E-expl = 0.8 x 10(51) erg. A possible scenario involves a massive and extended H-poor shell lost by the progenitor star a few years before explosion. The shell is hit, heated, and accelerated by the supernova ejecta. The accelerated shell+ejecta rapidly dilutes, unveiling the unperturbed supernova spectrum below. The outer ejecta start to interact with a H-poor external CSM lost by the progenitor system about 9-90 yr before the explosion.