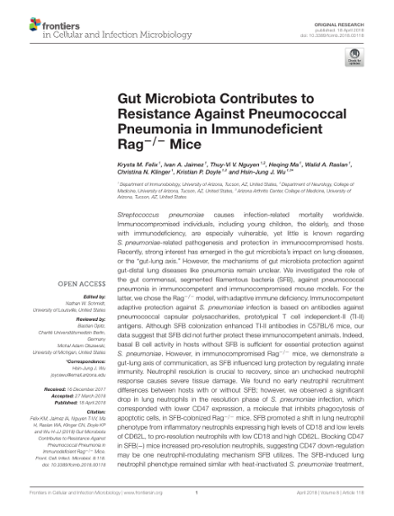 FRONTIERS IN CELLULAR AND INFECTION MICROBIOLOGY

© 2018 Felix, Jaimez, Nguyen, Ma, Raslan, Klinger, Doyle and Wu. This is an open-access article distributed under the terms of the Creative Commons Attribution License (CC BY).

Streptococcus pneumoniae causes infection-related mortality worldwide. lmmunocompromised individuals, including young children, the elderly, and those with immunodeficiency, are especially vulnerable, yet little is known regarding S. pneumoniae-related pathogenesis and protection in immunocompromised hosts. Recently, strong interest has emerged in the gut microbiota's impact on lung diseases, or the "gut-lung axis." However, the mechanisms of gut microbiota protection against gut-distal lung diseases like pneumonia remain unclear. We investigated the role of the gut commensal, segmented filamentous bacteria (SFB), against pneumococcal pneumonia in immunocompetent and immunocompromised mouse models. For the latter, we chose the Rag(-/-) model, with adaptive immune deficiency. lmmunocompetent adaptive protection against S. pneumoniae infection is based on antibodies against pneumococcal capsular polysaccharides, prototypical T cell independent-II (TI-II) antigens. Although SFB colonization enhanced TI-II antibodies in C57BL/6 mice, our data suggest that SFB did not further protect these immunocompetent animals. Indeed, basal B cell activity in hosts without SFB is sufficient for essential protection against S. pneumoniae. However, in immunocompromised Rag(-/-) mice, we demonstrate a gut-lung axis of communication, as SFB influenced lung protection by regulating innate immunity. Neutrophil resolution is crucial to recovery, since an unchecked neutrophil response causes severe tissue damage. We found no early neutrophil recruitment differences between hosts with or without SFB; however, we observed a significant drop in lung neutrophils in the resolution phase of S. pneumoniae infection, which corresponded with lower CD47 expression, a molecule that inhibits phagocytosis of apoptotic cells, in SFB-colonized Rag(-/-) mice. SFB promoted a shift in lung neutrophil phenotype from inflammatory neutrophils expressing high levels of CD18 and low levels of CD62L, to pro-resolution neutrophils with low CD18 and high CD62L. Blocking CD47 in SFB(-) mice increased pro-resolution neutrophils, suggesting CD47 down-regulation may be one neutrophil-modulating mechanism SFB utilizes. The SFB-induced lung neutrophil phenotype remained similar with heat-inactivated S. pneumoniae treatment, indicating these SFB-induced changes in neutrophil phenotype during the resolution phase are not simply secondary to better bacterial clearance in SFB(+) than SFB(-) mice. Together, these data demonstrate that the gut commensal SFB may provide much-needed protection in immunocompromised hosts in part by promoting neutrophil resolution post lung infection.

Except where otherwise noted, this item's license is described as © 2018 Felix, Jaimez, Nguyen, Ma, Raslan, Klinger, Doyle and Wu. This is an open-access article distributed under the terms of the Creative Commons Attribution License (CC BY).