In Situ Oxidation of 1,4-Dioxane with Persulfate-Based Oxidation Activated by Iron Minerals 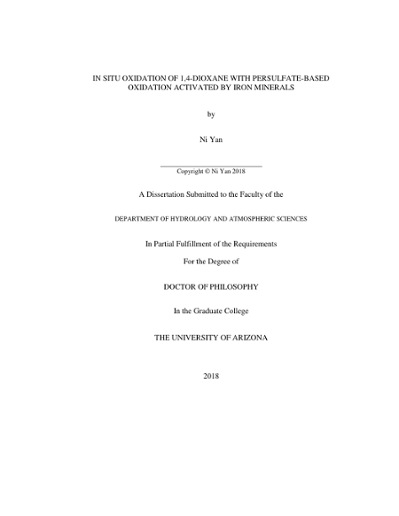 Groundwater contaminant plumes of 1,4-dioxane (dioxane) and its co-contaminants (chlorinated solvents) have been found at many hazardous waste sites. There is increasing attention paid to the persulfate-based activation method for in situ degradation of organic contaminants due to its high efficiency and low cost. Iron mineral-based remediation methods, such as siderite and natural aquifer geomedia, have been of sustained interest due to their potential to activate oxidants in situ without the addition of extra activation chemical into the subsurface. However, very few studies have investigated the effectiveness of persulfate-based activation by natural aquifer materials, and these few studies have focused on oxidant activation and not on the efficacy of contaminant degradation nor on dioxane compounds specifically. Hydrogen peroxide is another promising oxidants with high oxidation potential. The effectiveness is well demonstrated when applying it individually. However, the combined system of activated hydrogen peroxide and persulfate are poorly understood. The combination of the two oxidants has the potential to enhance the transport of oxidant and their distribution across larger radii. In addition, co-occurrence of dioxane with chlorinated-solvent compounds and the influence of groundwater constituents are also very important for site application. One objective of the current study is to investigate the capacity of natural soils and sediments to activate a binary persulfate/peroxide system to specifically enhance in-situ degradation of dioxane. Batch and column experiments are conducted with four natural geomedia. The results indicate the selected subsurface media could successfully induce activation of oxidant, which led to enhanced dioxane degradation. The oxidation-enhancement potential of the four geomedia used herein varied primarily due to the magnitude of available sediment-phase iron, and possibly with minor contribution of manganese oxides and soil organic matter. An alternative remediation method for sites at which the natural sediment does not have sufficient activation capacity is to use a permeable reactive barrier (PRB). However, the standard PRB, which employs iron filings as the reactive medium, are generally not effective for treating dioxane. The potential of the iron-filings-based PRB supplemented with persulfate–based oxidation for combined oxidative-reductive removal of dioxane from groundwater was evaluated in this study. The feasibility was proved by the successful activation of persulfate and facilitation of dioxane degradation using iron filings in both batch and column experiments. Approximate transport distances required to achieve a targeted degree of dioxane degradation can be estimated using the measured rate coefficients and groundwater velocity at the plume scale. It is shown by this research that both ferrous ion and alkaline condition can activate the binary oxidant hydrogen peroxide-persulfate system to degrade dioxane. However, ferrous ion was significantly more effective than alkaline due to the different activation mechanism. Ferrous ion directly catalyzed the decomposition of hydrogen peroxide and persulfate and generated hydroxyl and sulfate radicals with high oxidation potential. In contrast, it is hypothesized that under alkaline conditions, hydroxyl and sulfate radicals were generated via the reactions between hydrogen peroxide/persulfate and an intermediate ion, hydroperoxide anion, which decreased effective production of radicals. The degradation rate of dioxane by the activated binary hydrogen peroxide-persulfate system was slower in the presence of groundwater and typical groundwater constituents compared to ultrapure water. Chloride, sulfate, bicarbonate, potassium, calcium, and magnesium ions that are present in groundwater inhibited the oxidative degradation of dioxane. The inhibition was particularly strong for bicarbonate and calcium ions. Therefore, the scavenging effect of ions, especially critical for bicarbonate and calcium, may need to be considered during calculation of the total oxidant demand (TOD) when planning field scale applications. Overall, the results of the study indicate that the persulfate-based oxidation activated by iron minerals is generally effective for treating dioxane alone and as a co-contaminant with TCE. The effectiveness of employing in situ activated in situ chemical oxidation (ISCO) will depend on numerous site-specific factors including groundwater hydraulics and contaminant concentrations in addition to geochemical properties of the geomedia and groundwater.