The Ability to Not-Find: Failure, Memory, and Hope in the American Novel 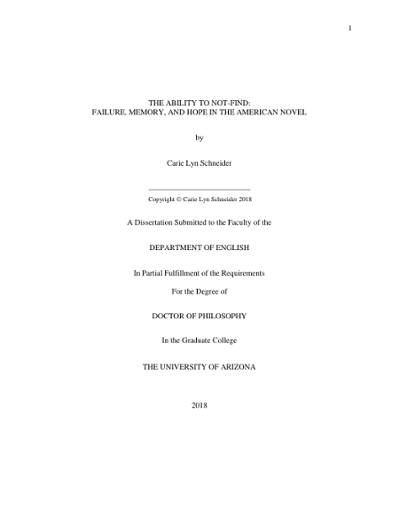 My dissertation examines the formal effects of time, memory, and failure in representative American novels, asserting that failures of interpretation and representation constitute a positive “ability to not-find” essential to the form of the novel. This concept of constitutive failure comes from revisiting Georg Lukács’ foundational text The Theory of the Novel and re-translating select passages to open up a new line of inquiry into novelistic form by recovering compound nouns Lukács coined that have been until now lost in translation. The ubiquitous Anna Bostock translation of The Theory of The Novel which English-speaking scholars have been using since the 1960s translates these key terms without noting the compound nouns Lukács coined specifically to make his argument about the interrelationship between time and form in the novel. While Lukács deploys these terms across his Theory, this single sentence in the original German of Die Theorie des Romans, is key: “Nur im Roman, dessen Stoff das Suchen-müssen und das Nicht-finden-Können des Wesens ausmacht, ist die Zeit mit der Form mitgesetzt” (66). The Bostock translation is mostly correct here, aside for the tricky middle with the two compound noun terms. These hyphenated constructions bear far more complex connotations than the simple translation of “seeking and failing to find the essence” (122). Considering the fluidity of connotations for each term, I translate this sentence as “Only in the Novel, whose very substance unveils the imperative-to-seek and ability-to-not-find of being, is time posited together with form.” While “Nicht-finden-Können” can also plausibly be read as “the inability to find,” my positive, paradoxical rendering as “the ability to not-find” is more useful for an analysis of novelistic form and temporality. I use Lukács’ theory as a springboard to analyze four exemplary American novels: Charles Brockden Brown’s Wieland, Herman Melville’s Moby-Dick, William Faulkner’s As I Lay Dying, and Thomas Pynchon’s Inherent Vice. My analysis observes the contaminations and mutations on the level of language within each novel—transformations that serve as traces of the formal effects of time, in particular the temporal forces of memory and hope, which Lukács describes as key “creative forces” essential to novel form. American novels, in particular, have a strange relationship to memory and hope as a result of the American nation’s own perverse relationship to past and future: a future formerly defined by a now-gone frontier, and a genocidal history that is forcibly forgotten. The residues of the corrosive past and the uncertainty of a coherent national future haunt the content and form of these novels. My analysis of Brockden Brown’s Wieland hinges upon the haunting of a repressed past that lurks in the substrate of the novel, wreaking formal havoc on narrative attempts to recount past events in a linear and coherent fashion. Melville’s Moby-Dick resists interpretation by any methodology because, as my analysis suggests, uninterpretability is the very essence of its form and content. My chapter on Faulkner’s As I Lay Dying examines the use of animal figures (buzzards, the fish, cows) to represent the passage of time; these figurations are doomed to incoherency, but their failures reveal the full force of time’s effects. The final chapter, on Pynchon’s Inherent Vice, explores the inability to find narrative closure—for the national memory and the novel itself—and the satisfaction possible in embracing this inevitable failure. By exploring diverse methodologies and ways of reading, experimenting with digital methods of computer-assisted reading combined with the traditional rigor of close reading, my dissertation navigates vital new approaches to literary critique. A methodology of constitutive failure not only reveals truths about the form of American novels but also offers a new path forward for our field: moving away from contemporary disillusionment with critique to embrace a queer ability to not-find, which transforms frustration into illumination.