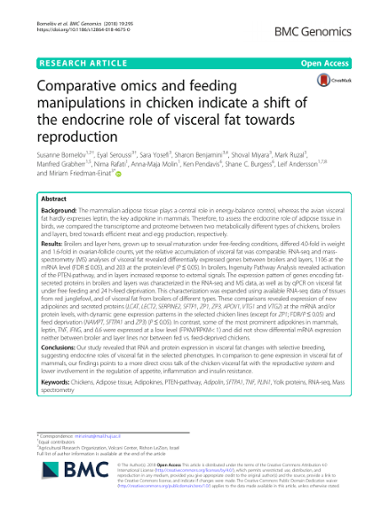 © The Author(s). 2018. This article is distributed under the terms of the Creative Commons Attribution 4.0 International License.

Background: The mammalian adipose tissue plays a central role in energy-balance control, whereas the avian visceral fat hardly expresses leptin, the key adipokine in mammals. Therefore, to assess the endocrine role of adipose tissue in birds, we compared the transcriptome and proteome between two metabolically different types of chickens, broilers and layers, bred towards efficient meat and egg production, respectively. Results: Broilers and layer hens, grown up to sexual maturation under free-feeding conditions, differed 4.0-fold in weight and 1.6-fold in ovarian-follicle counts, yet the relative accumulation of visceral fat was comparable. RNA-seq and mass-spectrometry (MS) analyses of visceral fat revealed differentially expressed genes between broilers and layers, 1106 at the mRNA level (FDR = 0.05), and 203 at the protein level (P = 0.05). In broilers, Ingenuity Pathway Analysis revealed activation of the PTEN-pathway, and in layers increased response to external signals. The expression pattern of genes encoding fatsecreted proteins in broilers and layers was characterized in the RNA-seq andMS data, as well as by qPCR on visceral fat under free feeding and 24 h-feed deprivation. This characterization was expanded using available RNA-seq data of tissues from red junglefowl, and of visceral fat from broilers of different types. These comparisons revealed expression of new adipokines and secreted proteins (LCAT, LECT2, SERPINE2, SFTP1, ZP1, ZP3, APOV1, VTG1 and VTG2) at the mRNA and/or protein levels, with dynamic gene expression patterns in the selected chicken lines (except for ZP1; FDR/P = 0.05) and feed deprivation (NAMPT, SFTPA1 and ZP3) (P <= 0.05). In contrast, some of the most prominent adipokines in mammals, leptin, TNF, IFNG, and IL6 were expressed at a low level (FPKM/RPKM<1) and did not show differential mRNA expression neither between broiler and layer lines nor between fed vs. feed-deprived chickens. Conclusions: Our study revealed that RNA and protein expression in visceral fat changes with selective breeding, suggesting endocrine roles of visceral fat in the selected phenotypes. In comparison to gene expression in visceral fat of mammals, our findings points to a more direct cross talk of the chicken visceral fat with the reproductive system and lower involvement in the regulation of appetite, inflammation and insulin resistance.

Except where otherwise noted, this item's license is described as © The Author(s). 2018. This article is distributed under the terms of the Creative Commons Attribution 4.0 International License.