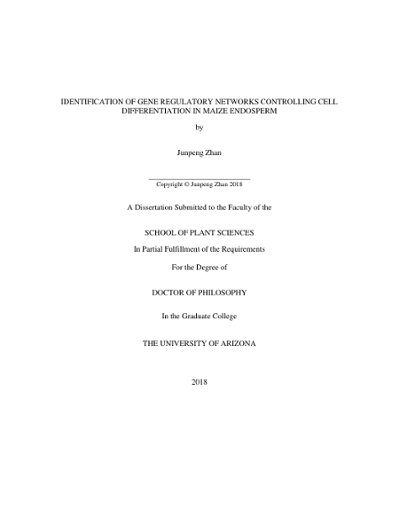 The endosperm of cereal grains accumulates large amounts of storage compounds such as carbohydrates and proteins that are essential for seed germination. These compounds also constitute a principal source of human food, animal feed, and industrial raw material globally. However, the molecular mechanisms controlling the cell differentiation of cereal endosperm remain largely unknown. This dissertation has been focused on identification of the gene regulatory networks associated with the differentiation of basal endosperm transfer layer (BETL), the starchy endosperm (SE), and the aleurone (AL) of the maize (Zea mays) endosperm, which are the main cell types involved in nutrient uptake from the maternal tissue and the synthesis and deposition of storage compounds. As a first step toward characterizing the gene networks associated with cell differentiation of the maize endosperm, the mRNAs in five major cell types of the differentiating endosperm and in the embryo and four maternal compartments of the maize kernel were profiled using RNA sequencing (RNA-Seq). Comparisons of these mRNA populations revealed the diverged gene expression programs between filial and maternal compartments. Gene coexpression network analysis identified coexpression modules associated with single or multiple kernel compartments including modules for the endosperm cell types. Detailed analyses of a coexpression module strongly associated with BETL identified a regulatory module activated by the MYB-Related Protein-1 (MRP-1), a previously reported regulator of BETL differentiation. To understand the interplay between the endosperm cell differentiation programs and the storage program which is activated immediately after the main cell types become distinguishable, direct and indirect target genes of Opaque-2 (O2), which is a bZIP family transcription factor (TF) that has been known as a major regulator of the endosperm storage program, were identified using a chromatin immunoprecipitation followed by high-throughput sequencing (ChIP-Seq) coupled with RNA-Seq. The analysis identified 1,863 O2-modulated genes, including 186 putative direct targets and 1,677 indirect targets, whose known/putative gene functions suggest a broad role for O2 in the regulation of cell differentiation, storage product deposition, maturation, and stress response of maize endosperm. Temporal examination of the expression patterns of O2 targets in the developing endosperm of an o2 mutant vs. wild type revealed at least two distinct modes of O2-mediated gene activation. Target-gene co-activation and protein-protein interaction studies identified two transcription factors—bZIP17 and NAKED ENDOSPERM2 (NKD2)—that are encoded by O2-activated genes, which can in turn co-activate other O2-network genes with O2. An ultrastructural analysis of AL cells of an o2 mutant showed that the mutant differs from the wild type in cell wall thickness and in the abundance and size distribution of lipid bodies and protein storage vacuoles, suggesting that O2 is required for proper differentiation of AL. The NKD1 and NKD2 genes encode paralogous INDETERMINATE DOMAIN (IDD) family TFs that have previously been shown to play critical roles in regulating many endosperm developmental processes, including the differentiation of AL and SE. To understand the individual functions of each NKD gene and to gain insights to the gene networks regulating endosperm development, a time-course transcriptome analysis of endosperm isolated from the single mutants and a double mutant of NKD1 and NKD2 was performed with comparison to a wild type using RNA-Seq. The analysis identified 11,554 genes differentially expressed between the mutants and the wild type. Comparison of genes dysregulated in the single and double mutants revealed that NKD1 and NKD2 regulate partially overlapping downstream gene sets. A detailed analysis of the NKD-regulated genes associated with the nkd mutant phenotype suggested that the double mutant phenotype is primarily associated with the loss of NKD1 function. Nonetheless, the analysis also uncovered a unique role for NKD2 in regulation of a subset of the mutant-phenotype-associated genes. An analysis of gene coexpression networks identified gene sets that are regulated by the NKDs in a highly coordinated manner, possibly in combination with or through regulation of other TFs. Together, the analyses of the MRP-1, O2, and NKD-regulated gene networks provided significant insights into the gene regulatory mechanisms underlying differentiation of the maize endosperm cell types. Because some components of the gene networks identified here are conserved across certain cereal species as well as eudicots, the resulting data sets have the potential to guide future improvement of grain yield and quality in maize and other economically important seed crops.