Intracontinental subduction beneath the Pamir Mountains: Constraints from thermokinematic modeling of shortening in the Tajik fold-and-thrust belt 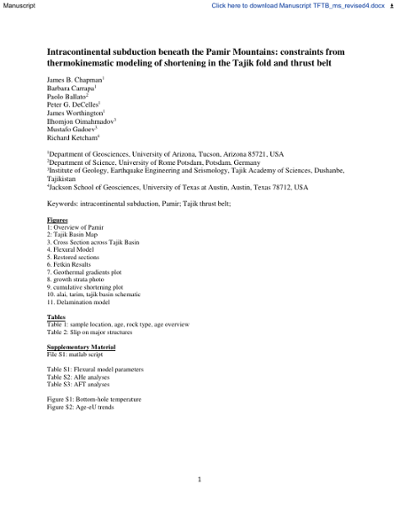 A regional, balanced cross section is presented for the thin-skinned Tajik fold-and-thrust belt, constrained by new structural and stratigraphic data, industrial well-log data, flexural modeling, and existing geologic and geophysical mapping. A sequential restoration of the section was calibrated with 15 new apatite (U-Th)/He ages and 7 new apatite fission-track ages from samples of the major thrust sheets within the Tajik fold-and-thrust belt. Thermokinematic modeling indicates that deformation in the Tajik fold-and-thrust belt began during the Miocene (prior to or ca. 17 Ma) and continues to near present, with long-term shortening rates of similar to 4-6 mm/yr and Pliocene to present rates of similar to 6-8 mm/yr. The Tajik fold-and-thrust belt can be characterized as two distinct, oppositely verging thrust belts. Deformation initiated at opposite margins of the Tajik foreland basin, adjacent the southwest Tian Shan and northwest Pamir Mountains, and propagated toward the center of the basin, eventually incorporating the foreland basin entirely into a composite fold-and-thrust belt. The western Tajik fold-and-thrust belt records at least 35-40 km of total shortening and is part of the greater Tian Shan orogenic system. The eastern Tajik fold-and-thrust belt records similar to 30 km of shortening linked to the Pamir Mountains. The amount of shortening in the Tajik fold-and-thrust belt is significantly less than predicted by models of intracontinental subduction, which call for subduction of an similar to 300-km-long slab of continental Tajik-Tarim lithosphere beneath the Pamir. Field observations and structural relationships suggest that the Mesozoic and younger sedimentary rocks of the Tajik Basin were deposited on and across the Northern Pamir terrane and then subsequently uplifted and eroded during orogenic growth, rather than undergoing subduction beneath the Pamir. The Paleozoic-Proterozoic(?) metasedimentary and igneous rocks exposed in the Northern Pamir terrane are equivalent to the middle-lower crust of the Tajik Basin, which has become incorporated into the Pamir orogen. We propose that the southdipping zone of deep seismicity beneath the Pamir, which is the basis for the intra-continental subduction model, is related to gravitational foundering (by delamination or large-scale dripping) of Pamir lower crust and mantle lithosphere. This contrasts with previous models that related the Pamir seismic zone to subduction with or without roll-back of Asian lithosphere. Delamination may explain the initiation of extension in the Pamir gneiss domes and does not require a change in plate boundary forces to switch between compressional and extensional regimes. Because the Pamir is the archetype for active subduction of continental lithosphere in the interior of continental plates (intracontinental subduction), the viability of this particular tectonic process may need to be reassessed.