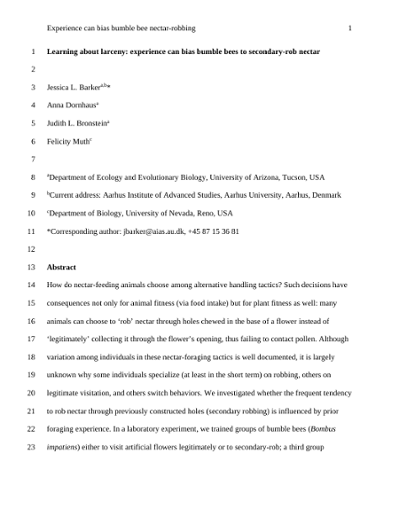 How do nectar-feeding animals choose among alternative flower-handling tactics? Such decisions have consequences not only for animal fitness (via food intake) but for plant fitness as well: many animals can choose to "rob" nectar through holes chewed in the base of a flower instead of "legitimately" collecting it through the flower's opening, thus failing to contact pollen. Although variation within a species in these nectar-foraging tactics is well documented, it is largely unknown why some individuals specialize (at least in the short term) on robbing, others on legitimate visitation, and others switch between these behaviors. We investigated whether the tendency to rob nectar through previously-made holes (secondary robbing) is influenced by prior foraging experience. In a laboratory experiment, we trained groups of bumble bees (Bombus impatiens) either to visit artificial flowers legitimately or to secondary-rob; a third group received no training. On subsequent visits to flowers, all bees had the opportunity to use either foraging tactic. We found that experience did affect bees' tendency to secondary-rob: trained bees were more likely to adopt the tactic they had previously experienced. Untrained bees initially sampled both tactics, but over time preferred to secondary-rob. Experience also increased bees' success at gaining nectar from flowers, but only when visiting flowers legitimately (the less preferred tactic). Overall, these findings highlight the importance of experience in animals' choices of alternative handling tactics while foraging and help explain long-standing observations of variation in nectar-robbing behavior among individuals of the same population. Significance statement Animals that can adopt alternative behaviors frequently use only one of them. A widespread but little understood example of this is nectar feeding, in which foragers can choose between "legitimately" collecting nectar through a flower's opening or "robbing" nectar via holes chewed through a flower's base. We showed in a laboratory experiment that prior foraging experience can bias bumble bees' choices to rob nectar from pre-existing holes (i.e., to "secondary"-rob). Initial exposure to flowers that could only be robbed or only be legitimately visited increased bees' tendency to subsequently adopt that behavior at the expense of sampling the alternative behavior, even when other bees seemed to prefer the alternative. These results help explain field observations that bees often specialize on a single nectar-collecting behavior and that there is individual variation in which behavior is adopted, contributing to our understanding of nectar robbing from the animals' perspective.