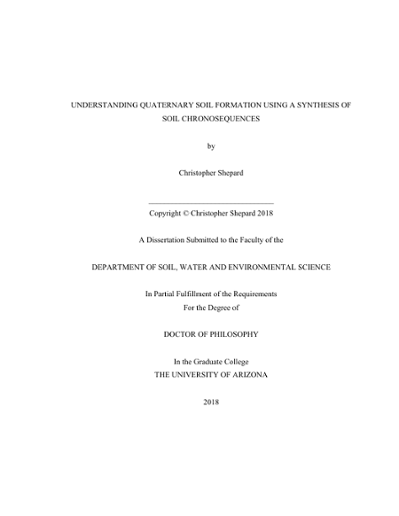 Soil formation represents a suite of biogeochemical and physical processes that transform rock and sediment into a complex, organized system that sustains life. Soils are at the heart of the critical zone, the thin outermost veneer of the Earth’s curst that supports life, and are the interface between the lithosphere, biosphere, hydrosphere and atmosphere. As such, soil formation is influenced by climate, biology, topography, parent material, and time; however, a key knowledge gap exists in our understanding of how past conditions, such as climate or parent material has shaped and altered soil formation across the Earth’s surface. Soil chronosequences quantify soil property change as a function of time. Soil chronosequences have been described for the last 70 years, and represent a valuable, but under utilized, record of soil change in relation to time, climate, ecosystems, geomorphic surfaces, and parent materials. The presented work was based on an extensive synthesis of soil chronosequence studies. Here, I present a collection of studies aimed at understanding how past and modern climate conditions altered soil formation processes and influenced the distribution of soil properties, and models that quantify the influence of past and modern climate on soil formation. I hypothesized that Quaternary climate change, driven by orbitally modulated insolation, is likely responsible for the observed patterns of soil evolution and preservation, and distributions of modern soil properties. Rapid climate change from glacial to interglacial periods generates large pulses of sediment that are deposited in sedimentary basins. Deposited sediment serves as the parent material for soil formation; most soils initially form under stabilized interglacial climates, and evolve throughout the generally slow return to full glacial conditions. At the next glacial-interglacial transition, the degree of soil development maintains the soils against the increased erosive potential during these rapid climate changes. The soil chronosequence database was used to test the hypothesis of Quaternary climate change influence of soil evolution. The greatest variability in soil physical properties was found between 10<sup>3</sup> – 10<sup>5</sup> years, on par with the time scale of Quaternary climate cycling, with the greatest climatic influence in soil physical properties at 10<sup>5</sup> years. A time series of soil age, representing a record of Quaternary soil preservation, exhibited regular periodicities at 41 ky and 98 ky, indicative of obliquity and eccentricity orbital cycles. Relating soil preservation to available paleoclimate proxies demonstrated that preserved soil ages generally occur following rapid glacial-interglacial transitions. The variability of the Quaternary climate system was likely a major force driving global soil property variability over time, by preferentially removing some soils through increased erosion at climate transitions. Periods of rapid climate change initiate periods of increased sediment production, which are likely key to generating sediments that serve as parent materials for further soil formation. This work demonstrates orbital climate signals in soil-landscapes systems, and supports an orbital interpretation of terrestrial paleoclimate proxies. Clays are the main soil formation product, and are a key variable for understanding the hydrology and biology of soils. Using the soil chronosequence database, a humped behavior in clay production was observed; clay production was initially slow, rapidly increased with minimal clay accumulation, and decreased exponentially following clay accumulation past a threshold value. A simple, semi-empirical humped clay production model was tested using the soil chronosequence synthesis, and effectively replicated the observed clay accumulation in the chronosequence soils. The humped clay production model indicated that clay production and erosion were tightly tuned; if erosion was too high, or clay production too low, a given soil profile would erode. This result indicated landscape stability under changing climate conditions may be tied to clay production in soils. The humped clay production model represents a simplistic approach to quantifying the observed bulk behavior of clay accumulation in soils. Given the variability in past environmental conditions and uncertainty in the initial soil state, soil formation is highly variable. Using a probabilistic formulation of Jenny’s soil state factor model, parameterized using a time-integrated measure of the mass and energy added to the soil system (as quantified using effective energy and mass transfer, or EEMT), the variable nature of soil formation was quantified. The probabilistic state factor model was realized using a bivariate normal probability distribution and was built using the soil chronosequence synthesis. This new approach was tested against the soil chronosequence synthesis and data from the US NSF Critical Zone Observatories. The approach effectively predicted clay content in the soil chronosequences, and the complex landscapes of the Critical Zone Observatories. This study represents a new approach for quantifying soil physical properties, which can be utilized for any variable with the appropriate data. From this work, a better understanding of the global evolution of soil-landscapes was developed, with the Quaternary climate system driving regular periods of soil formation, that are explicitly linked to orbital forcings. Further, state-of-the-art models were used to successfully simulate these observations. The presented models are widely applicable and can be included in digital soil mapping exercises and numerical landscape evolution models.