Phylogenetic Incongruence as a Signature of Past Events: Uncovering the Genomic Watermarks of Introgression and Gene Duplication 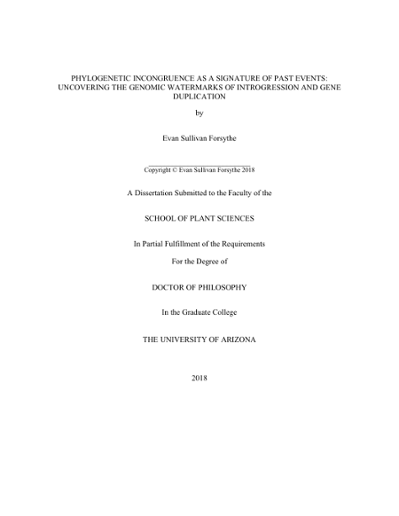 Eukaryotic genomes are ever-changing mosaics of past evolutionary events. Each site in the genome provides information about the evolutionary processes that have shaped its identity. Phylogenetics has long used the nucleotide identities at genomic sites as characters with which to reconstruct the ‘tree of life’ that unites living organisms. However, it was soon recognized that different sites in the genome often evolve independently, and thus each site tells a story of its own evolution, which may conflict with the stories told by other sites in the same genome. For example, in contradiction to the tidy concept of bifurcating tree-like evolution, we recognize that genetic material can be transferred between species, causing independent branches to reunite (i.e. reticulate) to form a shape that is more web-like than tree-like, referred to as a phylogenetic network. Further, when this type of reticulation occurs, it may only affect a portion of the genome, meaning phylogenies from some sites in the genome will reflect a history of reticulation while others will reflect a history of simple speciation. Another evolutionary process that can affect portions of the genome is gene duplication, which can result in a locus in the genome sharing homology with other loci in the same genome. When such multi-copy loci are used to infer branching order of several species, it can become very difficult to distinguish orthologs from out-paralogs, thus obscuring which nodes on the gene tree correspond with speciation events and which correspond with duplication events. Both reticulation and gene duplication can result in discordance between phylogenies inferred from differing regions in the genome, a condition termed phylogenetic incongruence. In plant evolution, reticulation and gene duplication are ubiquitous and a large field of study is devoted to the phylogenetic challenges caused by these processes. However, in addition to obfuscating species tree inference, these two processes are known to have considerable effects on the functional evolution of species; both can underlie the acquisition of novel adaptive traits. Therefore, it is important to identify and characterize these processes in model and crop systems. Toward this goal, the ‘challenge’ of phylogenetic incongruence can be turned on its head and instead used as a signature that illuminates the genomic watermarks of historical reticulation and duplication. In this dissertation, I present three studies in which I used genome-wide patterns of phylogenetic incongruence to infer evolutionary processes. In Appendix A, my coauthors and I describe a reticulation event that occurred more than nine million years ago in Brassicaceae and I explore the genomic and functional consequences that are still detectable in extant genomes. In Appendix B, I develop a method for determining which species received foreign genetic material during introgression events. I explore the versatility of this method by applying it to simulated whole genome sequences, as well as empirical genome data from extant and extinct hominins as well as mosquitos. Finally, In Appendix C, I infer complex duplication histories of more than 1,000 non-coding RNAs across the Arabidopsis genome, thereby revealing a mechanism underlying diversification in plant transcriptomes.