Mexican Gray Wolves and the Ecology of Fear: A Comparative Assessment of Community Assemblages in Arizona 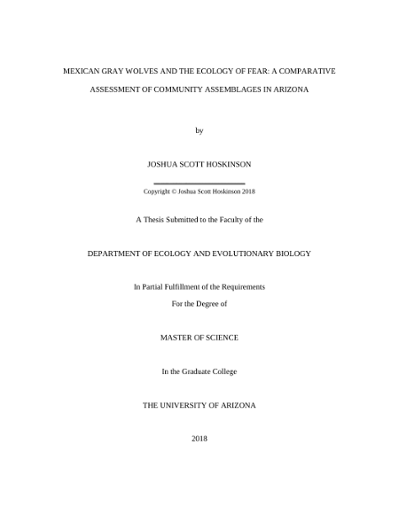 The dramatic ecological influence of northwestern gray wolves (Canis lupus occidentalis) on the landscape of Yellowstone National Park, termed a trophic cascade, has been well-documented and a marvel of reintroduction efforts of apex predators in the United States. These wolves have initiated both a traditional trophic cascade, which spans across trophic levels (predator-prey-vegetation), and a carnivore cascade, which spans across a predator guild (wolf-coyote-fox). The present study asks whether or not the Mexican gray wolf (Canis lupus baileyi) can influence the distribution of coyotes, gray foxes, elk, and mule deer in the Blue Range Wolf Recovery Area (BRWRA). This was completed through means of a camera trap survey, with two experimental plots within the core home range of Mexican gray wolves in the BRWRA (i.e. the “north” and “south” plots) and one plot west of the BRWRA (i.e. the “west” plot) without sustained Mexican gray wolf activity. After the camera survey, detection rates for the coyotes, gray foxes, elk, and mule deer were calculated. Through both a generalized linear mixed modelling (GLMM) approach, and a Kruskal-Wallis analysis, detection rates were compared across the north, south, and west plots. No statistically significant differences were found in detection rates between the plots, which means there is no indication that the Mexican wolves are influencing the distribution of coyotes, gray foxes, elk, or mule deer in the region. However, since the Mexican wolf population in Arizona is heavily managed, as well as issues with missing data in the camera survey itself, it would be unwise to make broad claims about the ecological implications of Mexican gray wolf reintroduction from this study.