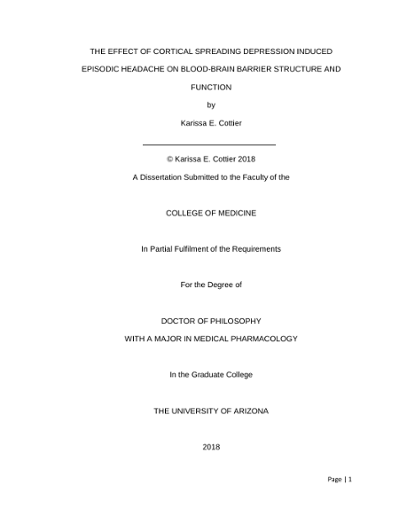 Previous research has demonstrated that BBB structure and function are altered as a result of various neurological disorders including ischemic stroke, traumatic brain injury, epilepsy, and infections of the brain. Additionally, the BBB has also been shown to alter its function in response to nociception. Despite the strong evidence for BBB alterations in both neurological disorders and pain, there is still debate on whether BBB permeability is altered in episodic headache disorders such as migraine. Cortical spreading depression (CSD) in the CNS is suggested as a common mechanism contributing to both headache production and BBB changes. In previous studies examining BBB changes in response to CSD, animals were anesthetized during the study, preventing any behavioral assessments. Additionally, in studies examining CSD induced nociceptive behaviors, BBB permeability was not assessed. Therefore, this work represents the first joint assessment of nociceptive responses and BBB integrity in response to CSD. In these studies, we observed a transient increase in BBB paracellular permeability in the cortex, but not brainstem, in response to KCl induced CSD. Additionally, at corresponding time points, we found that KCl induced CSD reduced periorbital withdrawal thresholds and rearing behavior, indicative of a state of facial mechanical allodynia. Despite strong evidence for CNS involvement in headache disorders, drug development for headache disorders remains focused on peripheral targets. Difficulty in delivering drugs across the BBB may partially account for this disparity. In this work, we demonstrated that KCl induced CSD increased the CNS uptake of radiolabeled sumatriptan in both the cortex and the brainstem. We also found that KCl induced CSD increased the expression of the putative sumatriptan transporter Oatp1a4 in the brainstem, which likely underlies the observed increased brainstem permeability to sumatriptan following CSD induction. Repeated CSD events may be harmful long-term. Therefore, we also investigated whether pre-treatment with the migraine prophylactic topiramate could prevent the CSD induced increase in BBB permeability. In these studies a single dose of topiramate was not able to block CSD induced BBB changes; importantly, topiramate and other migraine prophylactic drugs are typically given chronically to reduce the occurrence and severity of attacks. Therefore further studies should be conducted to determine if chronic topiramate treatment has any protective effects on the BBB in this model. Often, changes in BBB permeability are accompanied by decreases in tight junction protein expression, including occludin, claudin-5, and ZO-1. Here, however, we did not observe any changes in expression of either occludin or claudin-5 in response to cortical KCl induced CSD. BBB permeability can also be decreased through changes in TJ protein localization. We observed a change in claudin-5, but not occludin or ZO-1, localization in rats where CSD was induced with cortical KCl injections. This was recapitulated in an in vitro model using bEnd.3 mouse brain endothelial cells. Additionally, treatment of these cells with a CSD cocktail comprised of KCl, ATP, and glutamate with a pH of 6.8 was also able to cause claudin-5 relocalization. Interestingly, potassium influx mechanisms including the Na+/K+ ATPase and Kir6 channels have been implicated in BBB regulation. We found that blockade of these mechanisms with digoxin or AMP-PNP, respectively was able to prevent KCl or CSD cocktail-induced claudin-5 relocalization. Since claudin-5 is the component of the BBB which regulates permeability to ions and small molecules, these changes may represent the BBB’s effort to re-establish membrane ionic equilibrium. Finally, this work addresses sex differences in migraine, particularly as they relate to the BBB. In previous studies, female sex hormones have been shown to facilitate both nociception and CSD production. Here, we found that female rats had a more intense response to cortical KCl induced CSD. Additionally, we demonstrated that the female sex hormone 17-β-estradiol can, on its own, induce nociceptive behaviors in rats. Finally we observed several changes in BBB structure and function related to sex hormones. Consistent with previous studies, we found that ovariectomy increased BBB permeability. When investigating estradiol induced molecular changes at the BBB, we turned our attention to the sodium/hydrogen exchanger NHE1 due to its role in regulating cell excitability, its reported functional regulation by estradiol, and in vitro data implying expression may play a role in triptan uptake. Here, we found that estradiol reduces NHE1 expression in a concentration dependent manner in GPNT rat brain endothelial cells, but not other CNS cell types such as microglia or astrocytes. Additionally, we found that testosterone did not affect its expression. These data suggest that estradiol may control CNS ion balance and excitability due to its regulation of BBB ion exchangers such as NHE1. Together, the results presented herein demonstrate that CSD induces episodic headache-like behaviors that coincide with alterations in BBB structure and function. These changes can be taken advantage of clinically, by dosing drugs at specific times to increase their access to the CNS. On the other hand, episodic headache induced BBB changes may also produce long-term deleterious effects. Therefore, further studies should be conducted to fully elucidate the mechanisms behind headache induced BBB changes so that they may be prevented through appropriate therapeutic interventions.