SAVAGES, SINNERS, AND SAINTS: THE HAWAIIAN KINGDOM AND THE IMPERIAL CONTEST, 1778-1839 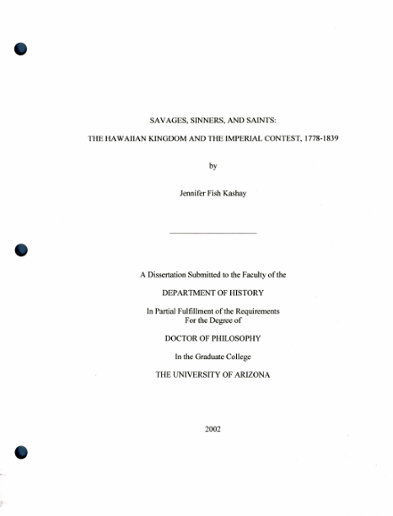 This dissertation uses the writings of sailors, traders, and diplomats, American missionaries, and Hawaiian chiefs, as well as anthropological theories and ethnographic insights about Hawaiian culture to examine the cultural milieu created by western sojourners in Hawaii, contestation over the interrelated issues of morality, sexuality, religion, economics, and politics that occurred with the arrival of American evangelists, and the ways in which Hawaiian chiefs and commoners negotiated a delicate and calculated path between the embattled imperialist forces in their islands. This study places Hawaiian experiences within the broader outlines of American social, religious, and expansionist history. It offers a distinctly new interpretation of imperial relations in Hawaii, one that others may choose to build upon. In the past two decades, scholars of postmodernism and subaltern studies have devised new approaches to examining western imperialism in Africa, India, and China. However, only a handful of scholarly works have focused on western imperialism in Hawaii. Following trends in colonial scholarship and anthropological theory, particularly the work of Marshall Sahlins, this study uses an ethnographic approach to explain how Hawaiians viewed the religious, social, political, and cultural changes that resulted from the presence of foreigners in their kingdom and their responses to the challenges of imperialism. As such, this dissertation is highly interdisciplinary and draws upon the secondary literature in anthropology, missiology, colonialism, and Native American history. The issue of Hawaiian sovereignty has received national attention in recent years. Most scholars date the loss of Hawaiian independence to the moment in 1893 when U.S. Marines helped dethrone Queen Lili'uokalani. In reality, the forces that led to the annexation of the islands to the United States began with Captain James Cook's 1778 arrival in Hawaii. By focusing on the complex relations between two polarized groups of foreigners-American missionaries and western traders, sailors, and diplomats-and Hawaiian chiefs and commoners, this study reveals how the combined effects of western economic, religious, cultural, and political imperialism, cultural disintegration, native factionalism, and chiefly miscalculation created the context for the loss of Hawaiian political and economic control after 1839, much earlier than previously asserted in the Iiterature.