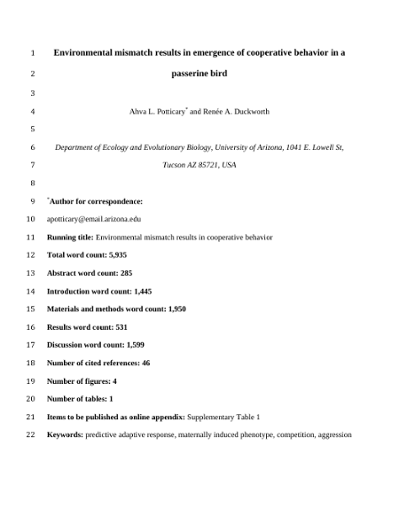 A major problem in the evolution of maternal effects is explaining the origin and persistence of maternally induced phenotypes that lower offspring fitness. Recent work focuses on the relative importance of maternal and offspring selective environments and the mismatch between them. However, an alternative approach is to directly study the origin and performance of offspring phenotypes resulting from mismatch. Here, we capitalize on a detailed understanding of the ecological contexts that provide both the cue and the functional context for expression of maternally induced offspring phenotypes to investigate the consequences of environmental mismatch. In western bluebirds, adaptive integration of offspring dispersal and aggression is induced by maternal competition over nest cavities. When nest cavities are locally abundant, mothers produce nonaggressive offspring that remain in their natal population, and when nest cavities are scarce, mothers produce aggressive dispersers. However, a few offspring neither disperse nor breed locally, instead helping at their parent's nest, and as a result these offspring have unusually low fitness. Here, we investigate whether females produce helpers to increase their own fitness, or whether helpers result from a mismatch between the cues mothers experience during offspring production and the breeding environment that helpers later encounter. We found that producing helpers does not enhance maternal fitness. Instead, we show that helpers, which were the least aggressive of all returning sons in the population, were most common when population density increased from the time sons were produced to the time of their reproductive maturity, suggesting that the helper phenotype emerges when cues of resource competition during offspring development do not match the actual level of competition that offspring experience. Thus, environmental mismatch might explain the puzzling persistence of maternally induced phenotypes that decrease offspring fitness.