Placing the Common Era in a Holocene context: millennial to centennial patterns and trends in the hydroclimate of North America over the past 2000 years 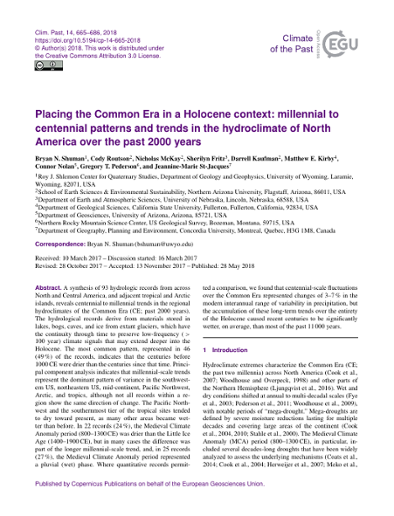 CLIMATE OF THE PAST

© Author(s) 2018. This work is distributed under the Creative Commons Attribution 3.0 License.

A synthesis of 93 hydrologic records from across North and Central America, and adjacent tropical and Arctic islands, reveals centennial to millennial trends in the regional hydroclimates of the Common Era (CE; past 2000 years). The hydrological records derive from materials stored in lakes, bogs, caves, and ice from extant glaciers, which have the continuity through time to preserve lowfrequency (> 100 year) climate signals that may extend deeper into the Holocene. The most common pattern, represented in 46 (49 %) of the records, indicates that the centuries before 1000 CE were drier than the centuries since that time. Principal component analysis indicates that millennialscale trends represent the dominant pattern of variance in the southwestern US, northeastern US, midcontinent, Pacific Northwest, Arctic, and tropics, although not all records within a region show the same direction of change. The Pacific Northwest and the southernmost tier of the tropical sites tended to dry toward present, as many other areas became wetter than before. In 22 records (24 %), the Medieval Climate Anomaly period (8001300 CE) was drier than the Little Ice Age (14001900 CE), but in many cases the difference was part of the longer millennialscale trend, and, in 25 records (27 %), the Medieval Climate Anomaly period represented a pluvial (wet) phase. Where quantitative records permitted a comparison, we found that centennial-scale fluctuations over the Common Era represented changes of 3-7% in the modern interannual range of variability in precipitation, but the accumulation of these long-term trends over the entirety of the Holocene caused recent centuries to be significantly wetter, on average, than most of the past 11 000 years.