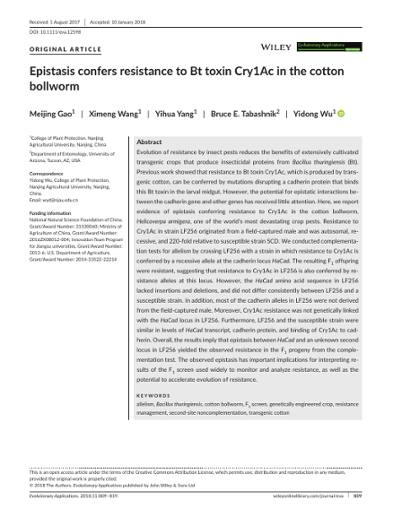 © 2018 The Authors. Evolutionary Applications published by John Wiley & Sons Ltd. This is an open access article under the terms of the Creative Commons Attribution License.

Evolution of resistance by insect pests reduces the benefits of extensively cultivated transgenic crops that produce insecticidal proteins from Bacillus thuringiensis (Bt). Previous work showed that resistance to Bt toxin Cry1Ac, which is produced by transgenic cotton, can be conferred by mutations disrupting a cadherin protein that binds this Bt toxin in the larval midgut. However, the potential for epistatic interactions between the cadherin gene and other genes has received little attention. Here, we report evidence of epistasis conferring resistance to Cry1Ac in the cotton bollworm, Helicoverpa armigera, one of the world's most devastating crop pests. Resistance to Cry1Ac in strain LF256 originated from a field-captured male and was autosomal, recessive, and 220-fold relative to susceptible strain SCD. We conducted complementation tests for allelism by crossing LF256 with a strain in which resistance to Cry1Ac is conferred by a recessive allele at the cadherin locus HaCad. The resulting F-1 offspring were resistant, suggesting that resistance to Cry1Ac in LF256 is also conferred by resistance alleles at this locus. However, the HaCad amino acid sequence in LF256 lacked insertions and deletions, and did not differ consistently between LF256 and a susceptible strain. In addition, most of the cadherin alleles in LF256 were not derived from the field-captured male. Moreover, Cry1Ac resistance was not genetically linked with the HaCad locus in LF256. Furthermore, LF256 and the susceptible strain were similar in levels of HaCad transcript, cadherin protein, and binding of Cry1Ac to cadherin. Overall, the results imply that epistasis between HaCad and an unknown second locus in LF256 yielded the observed resistance in the F-1 progeny from the complementation test. The observed epistasis has important implications for interpreting results of the F-1 screen used widely to monitor and analyze resistance, as well as the potential to accelerate evolution of resistance.

Except where otherwise noted, this item's license is described as © 2018 The Authors. Evolutionary Applications published by John Wiley & Sons Ltd. This is an open access article under the terms of the Creative Commons Attribution License.