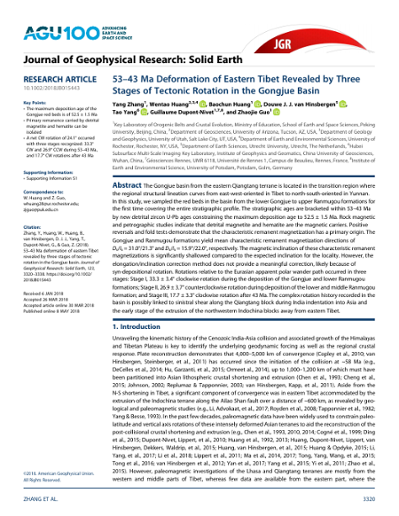 The Gongjue basin from the eastern Qiangtang terrane is located in the transition region where the regional structural lineation curves from east-west-oriented in Tibet to north-south-oriented in Yunnan. In this study, we sampled the red beds in the basin from the lower Gongjue to upper Ranmugou formations for the first time covering the entire stratigraphic profile. The stratigraphic ages are bracketed within 53-43Ma by new detrital zircon U-Pb ages constraining the maximum deposition age to 52.51.5Ma. Rock magnetic and petrographic studies indicate that detrital magnetite and hematite are the magnetic carriers. Positive reversals and fold tests demonstrate that the characteristic remanent magnetization has a primary origin. The Gongjue and Ranmugou formations yield mean characteristic remanent magnetization directions of D-s/I-s=31.0 degrees/21.3 degrees and D-s/I-s=15.9 degrees/22.0 degrees, respectively. The magnetic inclination of these characteristic remanent magnetizations is significantly shallowed compared to the expected inclination for the locality. However, the elongation/inclination correction method does not provide a meaningful correction, likely because of syn-depositional rotation. Rotations relative to the Eurasian apparent polar wander path occurred in three stages: Stage I, 33.33.4 degrees clockwise rotation during the deposition of the Gongjue and lower Ranmugou formations; Stage II, 26.93.7 degrees counterclockwise rotation during deposition of the lower and middle Ranmugou formation; and Stage III, 17.73.3 degrees clockwise rotation after 43Ma. The complex rotation history recorded in the basin is possibly linked to sinistral shear along the Qiangtang block during India indentation into Asia and the early stage of the extrusion of the northwestern Indochina blocks away from eastern Tibet.