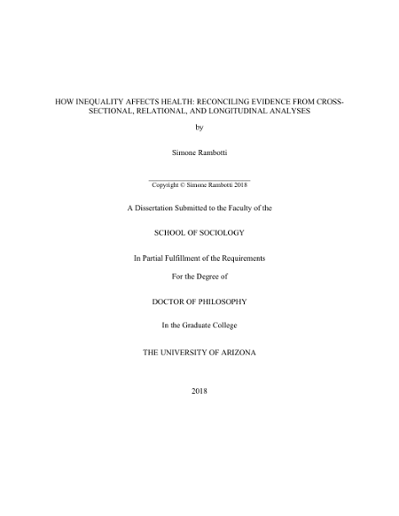 The income inequality hypothesis is one of the most influential ideas in public health. It posits that in the affluent world income inequality per se has a direct, independent and detrimental effect on health. This hypothesis, established in the 1990s, led to the publication of hundreds of articles across multiple disciplines. This hypothesis is also rather controversial. Debates surround the actual effect of income inequality and the hypothesized mechanisms. The evidence is consistently inconsistent. I argue that several conceptual and methodological limitations afflict this literature and hinder our understanding of the relationship between income inequality and health. In particular, I highlight four limitations: 1) simplistic treatment of inequality and poverty; 2) reliance on cross-national ecological comparisons that do not adequately consider the contributions of unusual cases; 3) reliance on cross-sectional comparisons; 4) reliance on a limited use of indicators. These limitations prompted the present dissertation research, which comprises three empirical studies. In the first study, I reanalyze publicly available data on income inequality and health across 20 affluent countries and 50 U.S. states. Drawing on the analytical difference between gap and headcount measures of income distributions, I argue that income inequality and poverty are dependent but distinct, and I estimate the extent to which poverty rates modify the relationship between income inequality and health. Across countries, the interaction of income inequality and poverty has a significant and adverse effect on health. Across U.S. states, instead, the interaction is not significant because the effect of poverty completely nullifies the effect of income inequality. In the second study, I delve into the interaction observed when comparing affluent countries in the first study. I use a recently developed methodology that decomposes regression coefficient estimates into unique case-specific contributions. I focus on the most frequently used measure of population health, life expectancy. I estimate OLS regression models with four different model specifications, which I then decompose. Four cases make major contributions to the coefficient estimates in all of the models. Two of these cases, Denmark and Japan, are particularly important because they challenge theoretical expectations: Denmark shows remarkably low life expectancy despite low levels of income inequality and poverty; Japan has the highest life expectancy despite relatively high levels of poverty. Denmark’s low life expectancy is explained by the high mortality risk of women born between WWI and WWII, who exhibited a lifelong high propensity to smoke. Japan’s high life expectancy is due to a concerted series of government initiatives (e.g., establishment of universal health insurance coverage, salt reduction campaigns, cost-effective antihypertensive drugs, dietary guidelines) that promoted healthy lifestyles and dietary habits. In the third and final study, I examine the income inequality hypothesis longitudinally. I estimate the effect of three indicators of income inequality (Gini coefficient, top 0.1% income share, and Theil index) on four outcomes (death rates for suicide, drug poisoning, homicide and heart disease) across the 50 U.S. states in 2000-2015. I estimate fixed-effects models that account for unobserved heterogeneity and omitted variable bias. My findings show no effect of income inequality on health. Lastly, I estimate mediation models that assess the indirect effect of income inequality on health via welfare generosity (in particular, the SNAP program, formerly known as the Food Stamp Program.) Across all specifications, income inequality has a negative indirect effect on mortality. Income inequality increases welfare generosity, which improves population health. As a whole, this dissertation shows that in the affluent world, income inequality has no direct or independent effect on health. Supporting individuals and household with no or low income might be a better way to improve population health than just reducing income inequality.