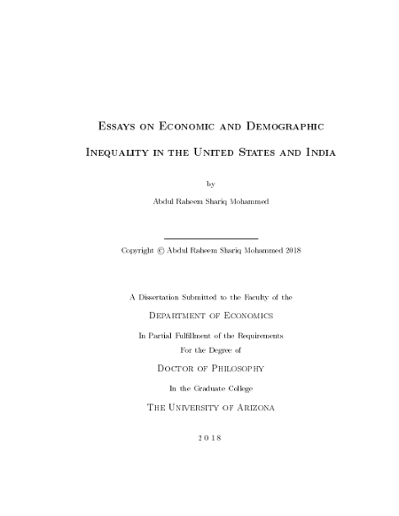 My dissertation encompasses two distinct lines of research related to economic and demographic inequality in India and the United States. In my first line of research, I address three of the challenges commonly faced by researchers estimating income mobility in developing countries. I find that the intergenerational income persistence in India is lower than analogous evidence from other developing countries, and that India's progress towards cross-group equality is positive but slow. In my second line of research, I evaluate the impact of Airbnb’s website redesign policy on racial discrimination by guests against hosts. By delaying guests’ exposure to race-identifying information of hosts, I find that the website redesign policy led to a narrowing of the racial bookings gap among New York City hosts. In a related paper, I further explore the black-white gap in bookings at Airbnb. I present evidence that there is a racial gap in the timing of booking. In the first chapter, I measure intergenerational income elasticity (IGE) for rural India. IGE measures the extent to which income levels are persistent across generations. Due to multiple challenges, reliable estimates of IGE are scarce for developing countries. I address three of these challenges in this paper that finds two main results. First, I find that the IGE in rural India during 1994-2012 lay between 0.28 and 0.37, which is lower than analogous evidence from other developing countries. Second, for the Indian caste groups that have been discriminated against for more than 2000 years, I find that their children are quite mobile with respect to their parents when measured by within group income mobility, but both parents and children from these disadvantaged groups are generally confined to the lower end of the income distribution. The pace of cross group equality is so slow that, all else equal, it would take about eight generations to reduce the gap between groups to 10% of the 1994 gap. In the second chapter, I study racial discrimination on Airbnb. Recent studies have found racial discrimination on online sharing economy platforms. In the case of Airbnb, for example, Edelman and Luca (2014) found that non-black hosts receive 12% higher price than black hosts for comparable properties. Despite growing evidence of its prevalence, we know little about what strategies can reduce racial discrimination on online sharing economy platforms. This paper contributes to the literature by testing a widely held perception that, in an online marketplace, making racial identity less prominent (as opposed to completely eliminating it) will reduce discrimination. I evaluate a recent website redesign policy of Airbnb that altered the salience of racial identity by delaying the exposure of guests to hosts’ profile photos (Figure). Airbnb’s intention behind redesigning its website was to induce guests to pay more attention to non-race related attributes such as price, past ratings, property photos, etc. The main focus of this paper is to evaluate if this policy was able to mitigate racial discrimination by guests against hosts. I analyze daily bookings and price data for hosts from four major U.S. cities. I find clear evidence of a narrowing of the racial bookings gap among New York City hosts. In particular, I find evidence that the black-white difference in logged average bookings reduced by about 0.10 units. This finding suggests that the black-white ratio of average bookings increased from about 0.71 to 0.79, which is closer to the non-discrimination proportion of 1. While the effect is large and statistically significant in NYC, it is less so in other three cities (Philadelphia, New Orleans, and Los Angeles). Finally, in chapter three, I further explore the black-white gap among Airbnb hosts in the timing of bookings: how far back in advance bookings were made. I find evidence that black hosts on average are booked about a week later than white hosts, and most of this racial gap remains unexplained even after controlling for a rich set of observables. I show robustness of this result to multiple choices of reference groups and to controlling for neighborhood fixed effects.