Enabling Alternative Islet Sources for Use in Islet Transplantation 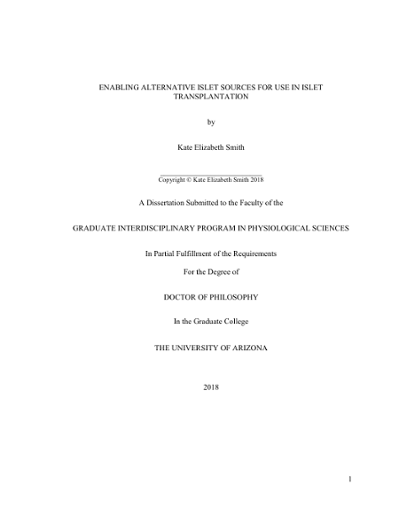 Implementation of islet transplantation as the standard of care for patients with Type 1 Diabetes (T1D) is restricted by a shortage of human donor pancreata from which to isolate islets and the need for systemic immunosuppression post-transplantation. To address the first problem, alternative islet sources have been pursued. In particular, porcine islets have emerged as a promising option. However, the optimal age of porcine donor for human translation has not yet been determined. For example, adult porcine islets provide immediate function, but neonatal islets are more logistically feasible to isolate. Encapsulation, which prevents contact between transplanted islets and recipient immune cells, has been proposed to address the second limitation. While encapsulation can effectively enable transplantation without immunosuppression, only limited success has been achieved with encapsulated porcine islets. Together, this illustrates the need to re-evaluate porcine islets as an alternative source to human islets. Specifically, they should be evaluated under encapsulated conditions in order to delineate their specific needs, and to determine the most suitable age for translation to encapsulated cell therapeutics. To facilitate the application of porcine islets, adult (API), juvenile (JPI), and neonatal (NPI) porcine islets were first characterized under unified protocols to quantify differences in oxygen demand, viability, insulin secretion, proliferative capacity, and transcriptomes under baseline conditions. Next, changes in API and NPI viability, function, and transcriptomes were characterized under various oxygen conditions which mimic encapsulation; ischemia (high density encapsulation with no supplemental oxygen), hypoxia (1% O2, encapsulation prior to device vascularization), and hyperoxia (40% O2, supplemental oxygen to facilitate high density encapsulation). Under control conditions, oxygen demand did not differ by age. Consistent with previous literature, API were determined to have the greatest glucose-responsiveness and secreted approximately 50 times more insulin under stimulatory conditions than NPI or JPI, consistent with significantly higher insulin content. NPI and JPI β-cells were significantly more proliferative than those in API. Accordingly, NPI transcriptomes were enriched for transcripts associated with cellular proliferation, but also demonstrated greater expression of transcripts encoding for known xenoantigens. Because JPI and NPI properties were nearly identical, JPI were not further evaluated. Contrary to expected results, few differential responses were evident between API and NPI following ischemic, hypoxic, or hyperoxic exposure. Accordingly, NPI did not demonstrate resistance to hypoxic exposure and instead exhibited impaired proliferative capacity. Given that the responses of API and NPI to ischemia, hypoxia, and hyperoxia were found to be similar, either population would be suitable for encapsulation with enhanced oxygenation. Because API are immediately functional, require a lower curative islet dose, and express fewer xenoantigens, they may be more suitable for clinical translation in the near term. However, as maturation protocols for NPI are developed and standardized, they may be a more efficient option in the long term.