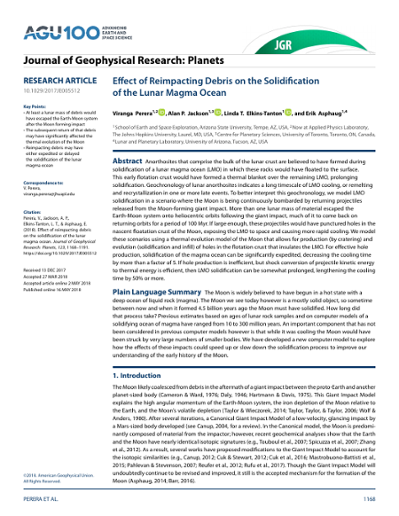 Anorthosites that comprise the bulk of the lunar crust are believed to have formed during solidification of a lunar magma ocean (LMO) in which these rocks would have floated to the surface. This early flotation crust would have formed a thermal blanket over the remaining LMO, prolonging solidification. Geochronology of lunar anorthosites indicates a long timescale of LMO cooling, or remelting and recrystallization in one or more late events. To better interpret this geochronology, we model LMO solidification in a scenario where the Moon is being continuously bombarded by returning projectiles released from the Moon-forming giant impact. More than one lunar mass of material escaped the Earth-Moon system onto heliocentric orbits following the giant impact, much of it to come back on returning orbits for a period of 100Myr. If large enough, these projectiles would have punctured holes in the nascent floatation crust of the Moon, exposing the LMO to space and causing more rapid cooling. We model these scenarios using a thermal evolution model of the Moon that allows for production (by cratering) and evolution (solidification and infill) of holes in the flotation crust that insulates the LMO. For effective hole production, solidification of the magma ocean can be significantly expedited, decreasing the cooling time by more than a factor of 5. If hole production is inefficient, but shock conversion of projectile kinetic energy to thermal energy is efficient, then LMO solidification can be somewhat prolonged, lengthening the cooling time by 50% or more. Plain Language Summary The Moon is widely believed to have begun in a hot state with a deep ocean of liquid rock (magma). The Moon we see today however is a mostly solid object, so sometime between now and when it formed 4.5 billion years ago the Moon must have solidified. How long did that process take? Previous estimates based on ages of lunar rock samples and on computer models of a solidifying ocean of magma have ranged from 10 to 300 million years. An important component that has not been considered in previous computer models however is that while it was cooling the Moon would have been struck by very large numbers of smaller bodies. We have developed a new computer model to explore how the effects of these impacts could speed up or slow down the solidification process to improve our understanding of the early history of the Moon.