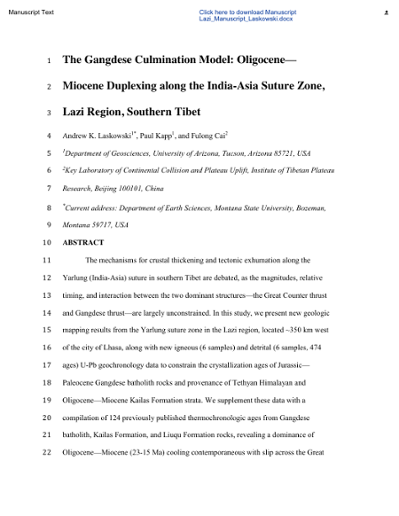 The mechanisms for crustal thickening and exhumation along the Yarlung (IndiaAsia) suture in southern Tibet are under debate, because the magnitudes, relative timing, and interaction between the two dominant structures-the Great Counter thrust and Gangdese thrust-are largely unconstrained. In this study, we present new geologic mapping results from the Yarlung suture zone in the Lazi region, located similar to 350 km west of the city of Lhasa, along with new igneous (5 samples) and detrital (5 samples, 474 ages) U-Pb geochronology data to constrain the crystallization ages of Jurassic- Paleocene Gangdese arc rocks, the provenance of Tethyan Himalayan and Oligocene-Miocene Kailas Formation strata, and the minimum age (ca. 10 Ma) of the Great Counter thrust system. We supplement these data with a compilation of 124 previously published thermochronologic ages from Gangdese batholith, Kailas Formation, and Liuqu Formation rocks, revealing a dominance of 23-15 Ma cooling contemporaneous with slip across the Great Counter thrust system and other potentially linked structures. These data are systematically younger than 98 additional compiled thermochronologic ages from the northern Lhasa terrane, recording mainly Eocene cooling. Structural and thermochronologic data were combined with regional geological constraints, including International Deep Profiling of Tibet and the Himalaya (INDEPTH) seismic reflection data, to develop a new structural model for the Oligocene-Miocene evolution of the Tethyan Himalaya, Yarlung suture zone, and southern Lhasa terrane. We propose that a hinterland-dipping duplex beneath the Gangdese mountains, of which the Gangdese thrust is a component, is kinematically linked with a foreland-dipping passive roof duplex along the Yarlung suture zone, the Great Counter thrust system. The spatial and temporal convergence between the proposed duplex structures along the Yarlung suture zone and the South Tibetan detachment system indicate that they may be kinematically linked, though this relationship is not directly addressed in this study. Our interpretation, referred to as the Gangdese culmination model, explains why the Gangdese thrust system is only locally exposed (at relatively deeper structural levels) and provides a structural explanation for early Miocene crustal thickening along the Yarlung suture zone, relief generation along the modern Gangdese Mountains, early Miocene Yarlung River establishment, and creation of the modern internal drainage boundary along the southern Tibetan Plateau. The progression of deformation along the suture zone is consistent with tectonic models that implicate subduction dynamics as the dominant control on crustal deformation.