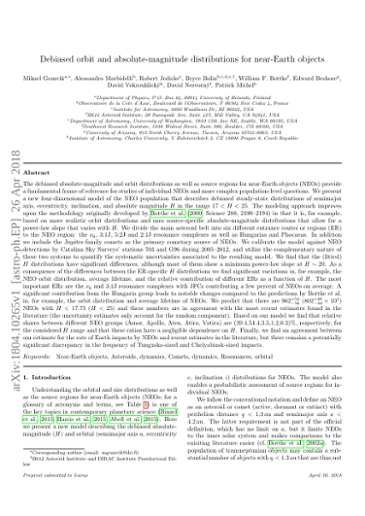 The debiased absolute-magnitude and orbit distributions as well as source regions for near-Earth objects (NEOs) provide a fundamental frame of reference for studies of individual NEOs and more complex population-level questions. We present a new four-dimensional model of the NEO population that describes debiased steady-state distributions of semimajor axis, eccentricity, inclination, and absolute magnitude H in the range 17 < H < 25. The modeling approach improves upon the methodology originally developed by Bottke et al. (2000, Science 288, 2190-2194) in that it is, for example, based on more realistic orbit distributions and uses source-specific absolute-magnitude distributions that allow for a power-law slope that varies with H. We divide the main asteroid belt into six different entrance routes or regions (ER) to the NEO region: the v(6), 3:1J, 5:2J and 2:1J resonance complexes as well as Hungarias and Phocaeas. In addition we include the Jupiter-family comets as the primary cometary source of NEOs. We calibrate the model against NEO detections by Catalina Sky Surveys' stations 703 and G96 during 2005-2012, and utilize the complementary nature of these two systems to quantify the systematic uncertainties associated to the resulting model. We find that the (fitted) H distributions have significant differences, although most of them show a minimum power-law slope at H similar to 20. As a consequence of the differences between the ER-specific H distributions we find significant variations in, for example, the NEO orbit distribution, average lifetime, and the relative contribution of different ERs as a function of H. The most important ERs are the v(6) and 3:1J resonance complexes with JFCs contributing a few percent of NEOs on average. A significant contribution from the Hungaria group leads to notable changes compared to the predictions by Bottke et al. in, for example, the orbit distribution and average lifetime of NEOs. We predict that there are 962(-56)(+52) (802(-42)(+48) x 10(3)) NEOs with H < 17.75 (H < 25) and these numbers are in agreement with the most recent estimates found in the literature (the uncertainty estimates only account for the random component). Based on our model we find that relative shares between different NEO groups (Amor, Apollo, Aten, Atira, Vatira) are (39.4,54.4,3.5,1.2,0.3)%, respectively, for the considered H range and that these ratios have a negligible dependence on H. Finally, we find an agreement between our estimate for the rate of Earth impacts by NEOs and recent estimates in the literature, but there remains a potentially significant discrepancy in the frequency of Tunguska-sized and Chelyabinsk-sized impacts. (C) 2018 The Authors. Published by Elsevier Inc.