LoCuSS: The infall of X-ray groups on to massive clusters 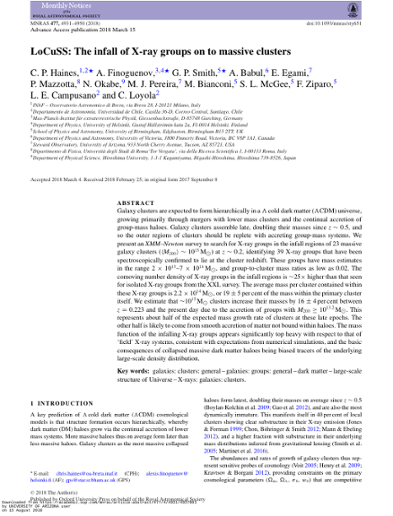 © 2018 The Author(s) Published by Oxford University Press on behalf of the Royal Astronomical Society.

Galaxy clusters are expected to form hierarchically in a Lambda cold dark matter (Lambda CDM) universe, growing primarily through mergers with lower mass clusters and the continual accretion of group-mass haloes. Galaxy clusters assemble late, doubling their masses since z similar to 0.5, and so the outer regions of clusters should be replete with accreting group-mass systems. We present an XMM-Newton survey to search for X-ray groups in the infall regions of 23 massive galaxy clusters (< M-200 > similar to 10(15)M(circle dot)) at z similar to 0.2, identifying 39 X-ray groups that have been spectroscopically confirmed to lie at the cluster redshift. These groups have mass estimates in the range 2 x 10(13)-7 x 10(14)M(circle dot), and group-to-cluster mass ratios as low as 0.02. The comoving number density of X-ray groups in the infall regions is similar to 25x higher than that seen for isolated X-ray groups from the XXL survey. The average mass per cluster contained within these X-ray groups is 2.2 x 10(14)M(circle dot), or 19 +/- 5 per cent of the mass within the primary cluster itself. We estimate that similar to 10(15)M(circle dot) clusters increase their masses by 16 +/- 4 per cent between z = 0.223 and the present day due to the accretion of groups with M-200 >= 10(13.2)M(circle dot). This represents about half of the expected mass growth rate of clusters at these late epochs. The other half is likely to come from smooth accretion of matter not bound within haloes. The mass function of the infalling X-ray groups appears significantly top heavy with respect to that of 'field' X-ray systems, consistent with expectations from numerical simulations, and the basic consequences of collapsed massive dark matter haloes being biased tracers of the underlying large-scale density distribution.