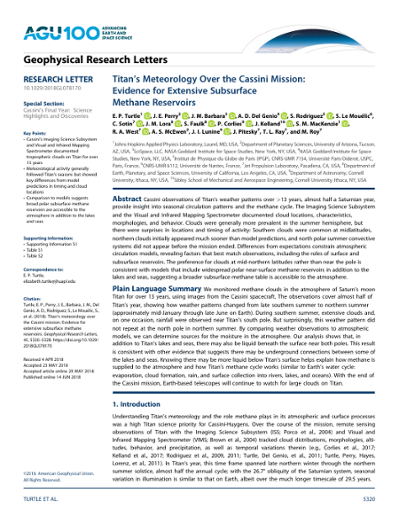 Cassini observations of Titan's weather patterns over >13years, almost half a Saturnian year, provide insight into seasonal circulation patterns and the methane cycle. The Imaging Science Subsystem and the Visual and Infrared Mapping Spectrometer documented cloud locations, characteristics, morphologies, and behavior. Clouds were generally more prevalent in the summer hemisphere, but there were surprises in locations and timing of activity: Southern clouds were common at midlatitudes, northern clouds initially appeared much sooner than model predictions, and north polar summer convective systems did not appear before the mission ended. Differences from expectations constrain atmospheric circulation models, revealing factors that best match observations, including the roles of surface and subsurface reservoirs. The preference for clouds at mid-northern latitudes rather than near the pole is consistent with models that include widespread polar near-surface methane reservoirs in addition to the lakes and seas, suggesting a broader subsurface methane table is accessible to the atmosphere. Plain Language Summary We monitored methane clouds in the atmosphere of Saturn's moon Titan for over 13 years, using images from the Cassini spacecraft. The observations cover almost half of Titan's year, showing how weather patterns changed from late southern summer to northern summer (approximately mid-January through late June on Earth). During southern summer, extensive clouds and, on one occasion, rainfall were observed near Titan's south pole. But surprisingly, this weather pattern did not repeat at the north pole in northern summer. By comparing weather observations to atmospheric models, we can determine sources for the moisture in the atmosphere. Our analysis shows that, in addition to Titan's lakes and seas, there may also be liquid beneath the surface near both poles. This result is consistent with other evidence that suggests there may be underground connections between some of the lakes and seas. Knowing there may be more liquid below Titan's surface helps explain how methane is supplied to the atmosphere and how Titan's methane cycle works (similar to Earth's water cycle: evaporation, cloud formation, rain, and surface collection into rivers, lakes, and oceans). With the end of the Cassini mission, Earth-based telescopes will continue to watch for large clouds on Titan.