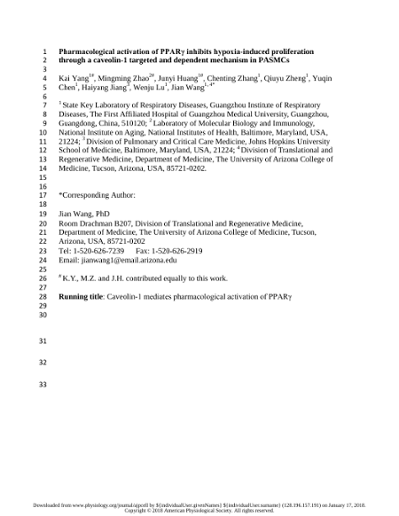 Previously, we and others have demonstrated that activation of peroxisome proliferator-activated receptor gamma (PPAR gamma) by specific pharmacological agonists inhibits the pathogenesis of chronic hypoxia-induced pulmonary hypertension (CHPH) by suppressing the proliferation and migration in distal pulmonary arterial smooth muscle cells (PASMCs). Moreover, these beneficial effects of PPAR gamma are mediated by targeting the intracellular calcium homeostasis and store-operated calcium channel (SOCC) proteins, including the main caveolae component caveolin-1. However, other than the caveolin-1 targeted mechanism, in this study, we further uncovered a caveolin-1 dependent mechanism within the activation of PPAR gamma by the specific agonist GW1929. First, effective knockdown of caveolin-1 by small-interfering RNA (siRNA) markedly abolished the upregulation of GW1929 on PPAR gamma expression at both mRNA and protein levels; Then, in HEK293T, which has previously been reported with low endogenous caveolin-1 expression, exogenous expression of caveolin-1 significantly enhanced the upregulation of GW1929 on PPAR gamma expression compared with nontransfection control. In addition, inhibition of PPAR gamma by either siRNA or pharmacological inhibitor T0070907 led to increased phosphorylation of cellular mitogen-activated protein kinases ERK1/2 and p38. In parallel. GW 1929 dramatically decreased the expression of the proliferative regulators (cyclin D1 and PCNA), whereas it increased the apoptotic factors (p21, p53, and mdm2) in hypoxic PASMCs. Furthermore, these effects of GW1929 could be partially reversed by recovery of the drug treatment. In combination, PPAR gamma activation by GW1929 reversibly drove the cell toward an antiproliferative and proapoptotic phenotype in a caveolin-1-dependent and -targeted mechanism.