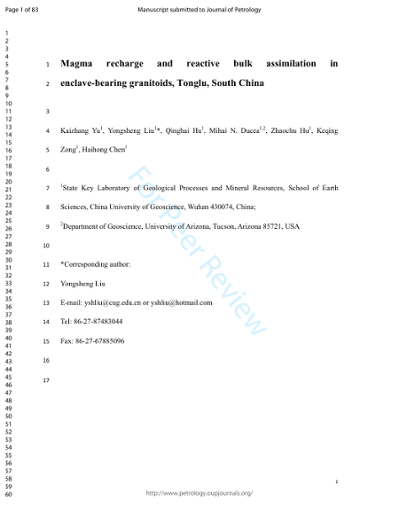 © The Author(s) 2018. Published by Oxford University Press. All rights reserved.

Magmatic processes leading to granitoid formation are of relevance to the evolution of continental crust and its mineralization. A comprehensive study of field observations with whole-rock and in situ mineral chemical and isotopic compositions was carried out on granitoids, mafic microgranular enclaves (MME) and country-rock xenoliths (CRX) from Tonglu, South China to constrain the magmatic processes operating. Zircon U-Pb geochronology indicates that the MME and granitoids formed coevally at similar to 130 Ma. Petrographic observations suggest that the MME are quenched mafic clots formed during incomplete magma mixing. The different zircon Hf isotopic compositions of the MME (eHf(t) 1/4 -4.0 to -0.7) and the host granitoids (epsilon(Hf)(t) = -8.1 to -1.7) indicate mingling between mafic and felsic magmas from different sources. The CRX are composed of fresh cores and dark rims. The pyroxene-rich fresh cores are depleted in Rb, Ba and K while the biotite-rich dark rims show obvious enrichments in Rb, Ba and K, indicating modification by hydrous K-rich felsic melts or fluids from the host magma. In contrast, some large CRX have embayed structures and are surrounded by several small, biotite-rich CRX, suggesting disaggregation and modification of large CRX into the host magma. The occurrence of abundant felsic magmatic veinlets in the CRX implies that they could have experienced brittle deformation in the cold shallow crust, which agrees with an emplacement depth of about 5 km estimated using Al-in hornblende geobarometry. The high Sr-87/(86)Sri (0.7129) and low eNd(t) (-10.2) values imply that these CRX were derived from the upper continental crust. All these features suggest a typical reactive bulk assimilation process. Microanalysis of Sr-87/Sr-86 ratios in plagioclase from the Tonglu granitoids vary over a large range (0.7073-0.7137) with complex rim-core-rim variations, which resulted from open-system processes. Given the variation in Sr isotopes, four types of plagioclase were identified. Type I plagioclase are homogeneous in terms of Sr-87/Sr-86, suggesting normal crystal fractionation. Recharge of mafic magma injecting into felsic magma resulted in the core-mantle variations of type II plagioclases. Albitic cores with high Sr-87/Sr-86 (up to 0.7092) indicate felsic magma with highly radiogenic Sr (Sr-87/Sr-86> 0.7092). Influx of mafic magma with less radiogenic Sr (Sr-87/Sr-86<0.7080) resulted in a decrease in Sr-87/Sr-86 and an abrupt increase of An contents (similar to An(30) to similar to An(60)) from core to mantle. Type III plagioclase are distinguished by lower Sr-87/Sr-86 ratios in the core (0.7084-0.7086) and significantly more radiogenic Sr at the rim (0.7097-0.7112), which is attributed to the assimilation of the country rocks. Core-mantle-rim variations in type IV plagioclase not only record magma recharge events, but also crustal assimilation. Increasing An values and decreasing Sr-87/Sr-86 ratios (down to 0.7075) from core to mantle and significantly more radiogenic Sr (up to 0.7117) in the outer rim suggest that the recharge event took place prior to the assimilation of ancient crustal