Cretaceous shortening and exhumation history of the South Pamir terrane 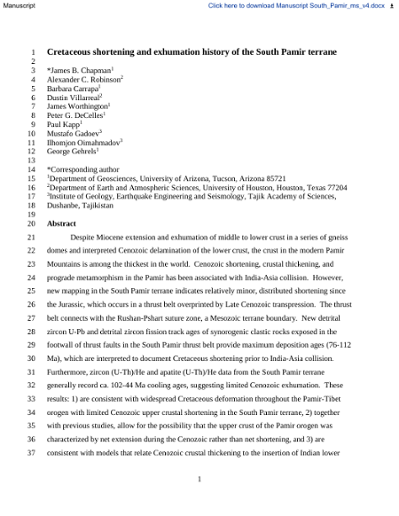 Despite Miocene extension and exhumation of middle to lower crust in a series of gneiss domes and interpreted Cenozoic delamination of the lower crust, the crust in the modern Pamir Mountains is among the thickest in the world. Cenozoic shortening, crustal thickening, and prograde metamorphism in the Pamir have been associated with India-Asia collision. However, new mapping in the South Pamir terrane indicates relatively minor, distributed shortening since the Jurassic, which occurs in a thrust belt overprinted by late Cenozoic transpression. The thrust belt connects with the Rushan-Pshart suture zone, a Mesozoic terrane boundary. New detrital zircon U-Pb and detrital zircon fission track ages of synorogemc clastic rocks exposed in the footwall of thrust faults in the South Pamir thrust belt provide maximum deposition ages (76-112 Ma), which are interpreted to document Cretaceous shortening prior to India-Asia collision. Furthermore, zircon (U-Th)/He and apatite (U-Th)/He data from the South Pamir terrane generally record cooling ages of ca. 102-44 Ma, suggesting limited Cenozoic exhumation. These results (1) are consistent with widespread Cretaceous deformation throughout the Pamir-Tibet orogen with limited Cenozoic upper crustal shortening in the South Pamir terrane, (2) together with previous studies, allow for the possibility that the upper crust of the Pamir orogen was characterized by net extension during the Cenozoic rather than net shortening, and (3) are consistent with models that relate Cenozoic crustal thickening to the insertion of Indian lower crust beneath the Pamir. Lower crustal thickening of the South Pamir terrane is difficult to reconcile with the prograde metamorphic history of gneiss domes in the South Pamir terrane and may require a relatively shallow (<15-20 km) shear zone separating lower crustal contraction from upper crustal extension.