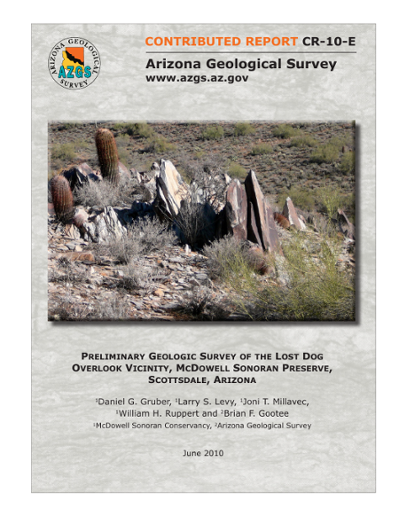 The southwestern portion of the McDowell Mountains, located in the McDowell Sonoran Preserve in Scottsdale, Arizona, was last mapped geologically more than 30 years ago. The curiosity of volunteers with the McDowell Sonoran Conservancy—a non-profit organization created to advocate for, educate about, and provide stewardship to the Preserve—about rocks from a prehistoric tool quarry in that area led to a project to conduct a preliminary geologic survey of the vicinity near the quarry. This project was conducted largely by volunteers who spent hundreds of hours working in the field with permission and managerial oversight from the City of Scottsdale Preservation staff and under the scientific supervision of Brian F. Gootee, research geologist with the Arizona Geological Survey. The volunteers did most of the field data collection, recording, and preliminary analysis, much of the mapping, and some initial geologic interpretation. Gootee did the thin-section analysis and photomicrographs, most of the geologic interpretation, and conducted numerous field visits and reviews of the volunteers’ work. Because of the unusually extensive volunteer involvement in the project, this paper describes the project approach, process, and intermediate findings of the field work and analysis in addition to the final project results. Each phase of the project is described based on the then-available information, analysis, and interim hypotheses. As more information was collected and more analysis was performed, the conclusions and therefore the nomenclature changed. This narrative approach accurately reflects the nature of field work and the scientific process. The investigation area was approximately rectangular around the tool quarry, located near a prominent ridge called Lost Dog Overlook in the southwestern foothills of the McDowell Mountains. The mountains and surrounding areas, including the investigation area, are part of the McDowell Sonoran Preserve. The investigation focused on the tool quarry area in order to determine why the rocks in that particular area were useful for tool-making. The rocks in the vicinity of the tool quarry reflect an extensive series of geologic events in several major episodes over the last 1,700 million years. A series of eruptions approximately 1,700 million years ago produced rhyolite flows. Subsequent burial, deformation, metamorphism, mineralization, uplift, and exposure produced an array of mineralized colors, fractures, joints, shear zones, and erosional patterns now visible at the surface. In addition, the survey noted newly-discovered outcrops of granite and limestone within the investigation area.