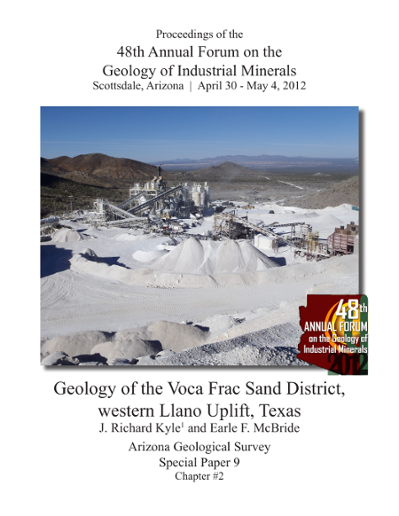 Hydraulic fracturing to enhance petroleum recovery was introduced in the 1940s, but the technology has become increasingly important in the recent development of petroleum production from unconventional reservoirs. The rapid growth of enhanced petroleum recovery via hydraulic fracturing has resulted in a corresponding increase in the demand for proppants. Texas has multiple unconventional petroleum plays, and the in-state production of industrial sands for hydraulic fracturing has doubled in the past decade. One of Texas’ major frac sand production areas is near Voca, Texas, where sands are produced from the Cambrian Hickory Sandstone on the northwestern flank of the Llano Uplift. The Hickory Sandstone, the basal member of the Riley Formation, is as much as 500 feet (150 m) thick and consists dominantly of marine sandstone with minor mudrock, conglomerate, and limestone, plus a local ironstone unit as much as 80 feet (25 m) thick. The Hickory Sandstone was deposited on the “Great Unconformity” developed on the Precambrian basement of Central Texas and elsewhere. The local basement consists of diverse metamorphic rocks and syn- to post-orogenic granites, ranging in age from 1,300 to 1,100 million years. The Late Cambrian Hickory Sandstone is subarkose to arkose, with local quartz arenite units, in which most or all feldspar has been destroyed during diagenesis. Although Hickory sediments were derived ultimately from the Precambrian basement, some were reworked from fluvial deposits and eolian dunes.