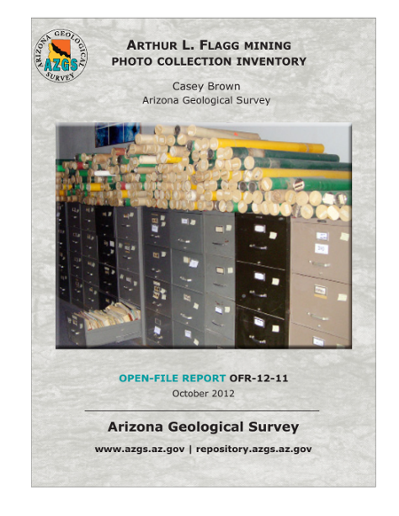 This inventory describes photos taken by A. L. Flagg during his travels as a mining engineer over the period 1905 to 1955 and they capture life in developing western North America. The photographs were largely identified using notes made by A.L. Flagg, research of ADMMR’s mine files and mining periodicals of the time. Principle photograph locations are in Arizona, Colorado, Idaho, Rhode Island, and Washington along with Durango and Oaxaca, Mexico. Arthur Leonard Flagg was born June 29, 1883, the son of Charles Welford and Anna R. (Daley) Flagg. He earned his bachelor’s degree in geology at Brown University in 1906. As a young mining engineer Arthur Flagg followed Horace Greeley’s advice and went west. He worked at assaying, surveying, and mining in Yavapai County, Arizona, during 1906 and 1907. From 1908 to 1912 he held a position as mine examiner in Durango, Mexico. In 1912, Arthur Flagg went into private practice as consulting engineer in Washington and Idaho. In 1913, he became manager of the Kelvin Sultana Copper Company, a position which he held until taking over as receiver of the Company in 1916. He resumed his private practice in Arizona in 1919. He has also held the positions of director of the Ace Mineral and Development Company, consulting engineer of the Gallagher Vanadium and Rare Mineral Corporation, and vice president of the Mines Holding Company. Mr. Flagg was appointed superintendent of the Mineral Department of the Arizona State Fair in 1946. In 1949, he became the mineral museum curator for the Arizona Department of Mineral Resources. In 1953, he turned 70, the retirement age for State employees, so several mining companies combined resources to pay his salary to keep him in the position of curator of the mineral museum. He contributed to many organizations including: Sigma Chi fraternity; American Association for the Advancement of Science; American Institute of Mining Engineers; Arizona Academy of Sciences; American Institute of Mining, Metallurgical, and Petroleum Engineers; Arizona Small Mine Operators and the Heard Museum Board. He was also president of the Mineralogical Society of Arizona, the Rocky Mountain Federation of Mineralogical Societies, and the American Federation of Mineralogical Societies. He was co-founder of the first two. Mr. Flagg was the author of many contributions to mineral and mining publications and two books: Rockhounds & Arizona Minerals and Mineralogical Journeys in Arizona.